A hairy black dog wakes up, yawns and waddles down the stairs, knocking a photo askew as it goes. So begins RSA Canada’s latest video, depicting a “brand relaunch” of Johnson Inc.

Using the hairy black dog as an ambassador “is our way to show our customers that we’re ready to serve you and we’ve always got your back,” Johnson’s chief operating officer Louisa Leonard stated Monday in a release. The St. John’s, Nfld.-based direct insurer distributes home, auto and travel insurance in several Canadian provinces.

“Our Johnson business is an area where we actually get to connect directly with the consumer,” Martin Thompson, president and CEO of RSA Canada, said this past October during the Insurance Brokers Association of Ontario annual convention. 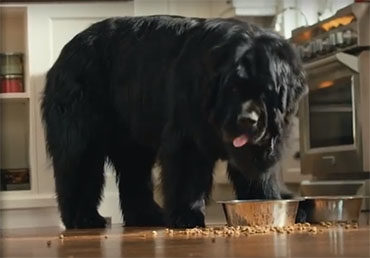 RSA published Monday a 30-second video showing the black dog Johnson in a home. A few seconds into the video, the dog walks into the kitchen, eats dry food off the floor and then runs out the door. The dog then brings a folded newspaper in its mouth to a man who then laughs.

The next scene shows the wheel of a car nearly running over a toy. The dog then jumps into the lap of a woman in the car who says, “thanks, Johnson.”

With the Johnson business, RSA tries to gain insights on how consumer behaviour is changing and then transferring those insights “back across to help shape our thinking in terms of what we do in the broker channel,” Thompson said this past October during the CEO panel, an annual feature of the IBAO convention.

One hot topic at the convention was the acquisition of brokerages by insurers.

“There is a lot going on in distribution, and vertical integration is just one component in what is a rapidly-evolving area,” Rowan Saunders, president and CEO of Economical, said during the panel. “I don’t think, from our perspective, that we find a need to actually have a brokerage network of our own. We are more focused on supporting our brokers.”

Also on the panel was Heidi Sevcik, CEO of Cambridge, Ont.-based Gore Mutual. In 2017, Gore acquired Howard Noble Insurance Limited, a brokerage with offices in Collingwood, Barrie and Alliston, Ont.

That deal was partly about “securing that broker in the broker channel,” rather than have its book of business be sold off to competitors, direct writers or insurers distributing through exclusive agents, Sevcik noted at the time.

EDITOR’S NOTE:  The headline has been corrected to reflect the fact that Johnson is an insurer-owned agency as opposed to a “brokerage,” as appeared in a previous headline.