David Johnston, until recently Governor General of Canada, has been hired by Fairfax Financial Holdings Ltd., the Toronto-based corporate parent of several property and casualty insurers, as a global advisor, Fairfax said Tuesday. 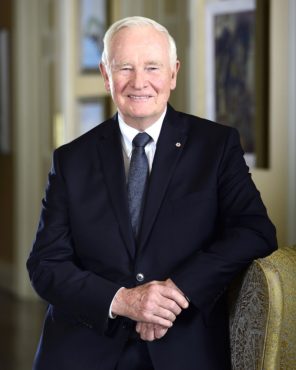 Johnston was replaced Oct. 2 as Governor General by Julie Payette.

Also on Tuesday, Deloitte Canada announced separately that Johnston has joined Deloitte as an executive advisor and “will be coming home to the Kitchener-Waterloo region to focus on opening Deloitte’s new office in Kitchener’s Innovation District.”

Johnston  “was previously an outstanding Fairfax director and has been a champion for Canadians and Canadian businesses around the world for over seven years in his role as the Governor General of Canada,” stated Prem Watsa, founder, chairman and chief executive officer of Fairfax, in a release.

Before replacing Michaëlle Jean as Governor General, Johnston had been on the Fairfax Board of Directors. At the time, Johnston was also president and vice-chancellor of the University of Waterloo.

Until this past May, Fairfax owned roughly a third of Mumbai-based ICICI Lombard General Insurance Company Limited, a joint venture between Fairfax and ICICI Bank that writes auto, home, bicycle, travel and health insurance. Fairfax has since sold about 24% of its ICICI Lombard shares.

Other Fairfax insurance holdings include Crum & Forster, a Morristown, N.J. writer of commercial specialty insurance and Zenith National, a Woodland Hill, Calif.-based workers compensation provider. Fairfax also has holdings in the retail and restaurant sectors, with brands such as Golf Town, William Ashley China, The Keg, Harvey’s, Swiss Chalet and Milestone’s, among others.

Fairfax announced in February it agreed to by Auckland-based Tower Limited, which writes P&C insurance in New Zealand, the Cook Islands, Fiji, Papua New Guinea, Samoa and Vanuatu. Three months earlier, Allied World and Fairfax announced a merger agreement valued at the time at about US$5 billion. That deal closed this past July. The minority of Allied World that Fairfax does not own is held by partners who helped finance the merger, including Ontario Municipal Employees Retirement System and Alberta Investment Management Corporation (AIMCo).

Fairfax is also acquiring American International Group Inc.’s local commercial and consumer insurance operations in Argentina, Chile, Colombia, Uruguay, Venezuela and Turkey. The acquisition of the Colombia and Chile have closed. Watsa said during a conference call in August that the acquisition of AIG’s operations in Argentina and Uruguay “are expected to be completed in the second half of 2017” and the operations in Venezuela are “expected to be completed in the first quarter of 2018.”

“As global advisor, Mr. Johnston will be expected to assist the many Presidents in the Fairfax group of companies with business opportunities, community responsibilities and government relations in each of the countries in which Fairfax and its partners operate, or wish to do business, around the globe,” Fairfax stated Oct. 17, 2017.

As Governor General, Johnston was the Queen’s representative in Canada, whose duties include summoning and dissolving Parliament, granting Royal Assent to bills and serving as commander-in-chief of Canada.