Barbara Bellissimo, former chief agent and senior vice-president of State Farm Canada and chair of the board of the Institute for Catastrophic Loss Reduction, is retiring from Desjardins at the end of this year. 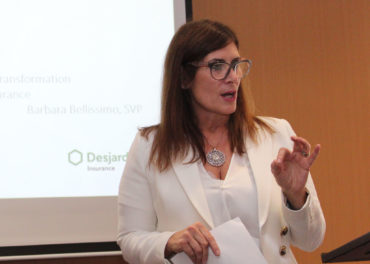 She is currently senior vice-president of the Desjardins Agent Network, a position she has held since Desjardins acquired the Canadian operations of State Farm in 2015.

After graduating from Western University in 1986, Bellissimo joined State Farm Canada in Scarborough, Ont., as an underwriter and moved through leadership positions in Canada and the US. She was chief agent from 2009 through 2014.

“Barbara made a very significant contribution to what remains today as the most important transaction and integration program in Desjardins’ history,” stated Denis Dubois, Desjardins Group’s executive vice president of wealth management and life and health insurance. “Over the last five years, Barbara has proven herself to be a high caliber leader who has been able to lead her team through many major changes with such finesse.”

Bellissimo has the Fellow Chartered Insurance Professional (FCIP) designation and served on the board of directors of the Insurance Bureau of Canada from 2009 through 2015. She will continue to serve on the Southlake Regional Health Centre Foundation Board.

After the completion of the successful integration of State Farm Canada, Bellissimo will take time off before determining her next career opportunity.

Benaaz Irani, who has worked with Desjardins for 18 years,  will assume the position as vice-president of the Desjardins Agent Network.

“Her mandate is to oversee the multi-line performance of the Desjardins exclusive agent network in Ontario, New Brunswick and Alberta with its $2 billion operation and a network of over 450 independent agents and their licensed team members,” DGIG stated of Irani, who has a masters of business administration from the Rotman School of Management.