Insurance brokers who compete against one another need to change their mindset and work with their competitors to address threats which could disrupt the industry, a speaker suggested Wednesday in Toronto. 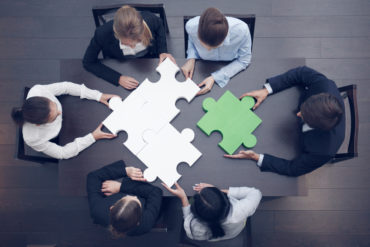 “If you all think each other are the competition, Brokerlink will continue to pick you off one at a time,” said Jim Harris, keynote speaker at the Insurance Brokers Association of Ontario (IBAO) annual convention. “You are not the competition to each other. It’s only when you change the mindset and see everyone here being on your team, that can profoundly change this industry.”

Harris, former leader of Canada’s Green Party, made his remarks at the Sheraton Centre during a keynote address before lunch. The IBAO convention continues until Friday.

Author of the book Blindsided: How to Spot the Next Breakthrough That Will Change Your Business, Harris gave several examples of firms that he says dominate their industries.

“Skype facilitates more international long distance phone calls than all of the major telcos of the world added together, but Skype doesn’t own any twisted pair of copper,” Harris noted.

“Netflix doesn’t own any cable, but on any given night in North America, 40% of the bandwidth is being consumed by Netflix.”

In the taxicab industry, Harris pointed out that Uber does not own any cars.

“The taxi industry really hasn’t understood yet that the rules of the game have changed and the only way they are going to survive is co-operation,” Harris said.

He asked audience members the “most fascinating thing” to them about riding an Uber vehicle.

“How many taxi cab drivers have offered you sparkling water to drink?” he asked.

“Did you know, when I am in Vegas, taking a normal taxi cab, they charge me an extra US$3.50 US – that’s like 5 bucks – to put it on a credit card? And did any of you ever have this experience before, when they used to call in your credit card number? How secure is that? Every ham operator in Vegas is listening to my secret number. Right. I feel so secure.”

Uber, he added, “hasn’t changed what a taxi is. They have completely reinvented what the experience of taking a taxi is.”

To counter the threat from Uber, Harris suggested, taxi firms need to co-operate on developing one single mobile app for all their firms, rather than each firm develop its own app.

“It requires an entirely different way of thinking, which the taxi industry hasn’t got around to yet,” he said. “We need to think differently. Einstein said, ‘If I have a problem and I only have 60 minutes to solve it, I would spend 55 minutes thinking about how I’m thinking. I’d spend 55 minutes perceiving how my perception could be off and then after that I’d spend five minutes solving it.”

Any industry could be “blindsided,” Harris said.

The total number of cellphones sold in 2000 was 107 million, Harris said.

“We are great problem solvers,” Harris said. “That is not the challenge. The challenge is problem seeing and opportunity seeing. “The way things have always been up until this point is not the way they are going to be in the future.”

More News
Related
City of Toronto issues Private Transportation Company licence to Uber
Insurers who fail to “adapt to what millennials are looking for” will let go of “majority” of customers: Intact president
Speakers weigh in on contentious topic of insurers with “broker arm interrupters”
Uber backs off plans to shutter Quebec operation, says it will continue for now

2 Comments » for Brokers are ‘not competition to each other,’ IBAO keynote speaker says