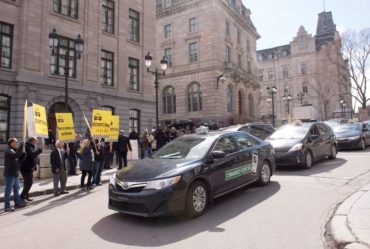 Taxi drivers demonstrate outside the Premier’s office as the cabinet meets at the Quebec Legislature, in Quebec City on Wednesday, May 4, 2016. The taxi industry is putting pressure on the government to ban Uber and other ride-sharing companies from their industry. THE CANADIAN PRESS/Jacques Boissinot

He added his organization will soon vote on whether or not to take the government to court over the deal.

Chevrette accused the government of betraying taxi drivers by negotiating with a company engaging in civil disobedience, accusing Uber of deliberately breaking the law by operating outside the government-controlled industry.

“So we have to conclude today that if you engage in stealing, not paying, civil disobedience – the government says we are here for you,” Chevrette told reporters.

“That’s the image the government is projecting today. And I think Premier Philippe Couillard should be embarrassed.”

The money collected will go into a fund dedicated for traditional taxi drivers, but it’s unclear what the fund will be used for.

Uber drivers will have to abide by several other regulations but won’t have to rent or purchase traditional permits, which cost upward of $200,000 if a car is included in the price.

Chevrette said the government should compensate drivers who have bought permits under the traditional system and who could see the value of their investment drop significantly in value.

Uber Canada released a statement Thursday saying it needs to evaluate whether it can continue to offer its services during the one-year pilot project, but that it will maintain its operations in the province “for the moment.”

The company said it “wants to show the government we are ready to work in a regulated industry and be a partner in innovation.”

Couillard said he is optimistic about the tentative deal.

“We can see the situation as a limited pie that everyone shares,” he said. “Or we can see this as occasion to expand the pie and everyone gets a bigger slice. I see it as the latter.”

The one year-pilot project allowing Uber to operate legally in Quebec begins 20 days after the government officially publicizes its terms, which Couillard expects will happen shortly.