However, it remains an open question as to whether a brokerage would actually need to tap into the subsidy. Many provincial governments have deemed brokerages to be essential services, as brokers note, and therefore exempt from mandatory shutdowns.

“In addition to the devastating health crisis, the COVID-19 pandemic is having a significant negative impact on small businesses,” Peter Braid, CEO of Insurance Brokers Association of Canada (IBAC), said in a statement to Canadian Underwriter when asked for comment about the wage subsidy announcement. “Many are having to reduce staffing levels, and this is having a ripple effect throughout the economy…

“It is too early to say if these new government supports may be utilized by smaller brokerages if needed. It is however certainly welcome news for their clients, some of whom have been affected by the impacts to our economy.”

As far as brokerages themselves go, Braid added, “most governments have deemed insurance to be an essential service, so we are fortunate that our industry has not been impacted as much as some others. With many brokerage offices now closed to the public, in many cases brokers are now working remotely and offering services virtually.” 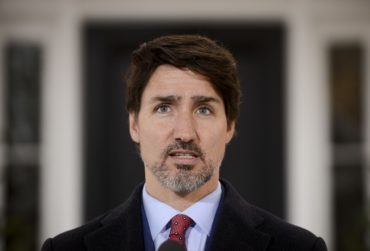 But while brokerages may not necessarily need to tap into the wage subsidy, they are certainly interested to hear more about other parts of Trudeau’s announcement Friday, said Colin Simpson, CEO of Insurance Brokers Association of Ontario.

“There are additional benefits in here,” Simpson told Canadian Underwriter. “There are additional costs [for a brokerage] in trying to get everyone working from home and getting everybody set up, so certainly the delayed payments of some of the taxes that have been announced are very beneficial. And potential access to business loans, if need be, could be very beneficial. So yes, I think it’s a great move forward. I very much look forward seeing in the next few days how that will be implemented.”

Trudeau announced the federal government’s wage subsidy program Friday, in response to government-ordered shutdowns of businesses across the country to reduce the spread of the novel coronavirus that causes COVID-19.

“I know for many of you, the past few weeks have been heartbreaking,” Trudeau said in his daily COVID-19 update Friday. “You’ve had to slow down your operations. In some cases, you’ve even had to close up shop for the foreseeable future. And because money isn’t coming in, you can’t afford to keep your employees on the payroll…

“Last week, we had announced that we would cover 10% of wages. But it’s becoming clear that we need to do much more, so we’re bringing that percentage up to 75% cent for qualifying businesses.

“This means that people will continue to be paid, even though their employer has had to slow down or stop its operations because COVID-19. We’re helping companies keep people on the payroll so that workers are supported and the economy is positioned to recover from this.”

In Denmark, the government similarly announced that it will cover 75% of a company’s wage bills to help its country’s businesses face a slowing economy caused by the virus. In Canada, small business owners have applauded Trudeau’s move to align Canada more closely to the response of its European counterparts.

Businesses have been hit hard by the social distancing measures that governments have ordered to slow down the spread of the COVID-19 virus. The strategy, known as “flattening the curve,” is to prevent the number of COVID-19 cases from overwhelming health care resources.

PBO’s report shows that, as businesses shut their doors and restrict their operations, the unemployment rate is expected to jump from 7.2% in 2020 Q1 to nearly 15% in both the second and third quarters of this year. This projection assumes that social distancing lasts for six months (through to August 2020) because of a COVID-19 pandemic. Under this scenario, real GDP would crater by 25% in 2020 Q2, PBO predicts.

Canadian P&C brokerages sustain an estimated 58,300 full-time equivalent jobs in Canada, according to a study released last year and commissioned by IBAC. In that study, Deloitte LLP surveyed 1,770 brokerage owners across Canada and estimated that in 2017, member brokerages contributed approximately $5.4 billion to Canada’s GDP, of which about $3.3 billion was attributable to labour income.

Although brokerages may not need to tap into the subsidy themselves, Simpson said brokers would no doubt be interested to hear more details about other parts of Trudeau’s announced package — including HST and GST deferrals, as well as business loans to help small businesses with cash-flow issues as a result of COVID-19. Those details are expected to be revealed Monday.

The Prime Minister also announced the launch of the Canada Emergency Business Account to help small businesses dealing with cash flow problems. “With this new measure, banks will soon offer $40,000 loans which will be guaranteed by the government to qualifying businesses,” Trudeau announced. “The loan will be interest-free for the first year, and if you meet certain conditions, $10,000 of it will be forgivable.”

Also, Trudeau said the federal government will be deferring GST and HST payments as well as duties and taxes owed on imports until June. “This is the equivalent of giving $30 billion in interest-free loans to businesses,” he said. “So if you’re struggling to get by right now and you have a payment due at the end of the quarter, we’re going to give you more time.”

Canadian P&C insurers welcomed Trudeau’s announcement to help bring relief to their Canadian small business clients. “This is welcome news for small businesses, struggling during this crisis,” Insurance Bureau of Canada said in a statement to Canadian Underwriter Friday. “Insurers are, for the most part, operating business as usual to help where possible.

“If anyone has questions about their current insurance coverage, or are concerned about their ability to continue to pay their premiums due to the impact of COVID-19, they should contact their insurance representative to discuss a potential solution.”