How P&C industry professionals are reacting to COVID-19: CU poll

Many Canadian property and casualty professionals are concerned about travelling to industry conferences, but a majority haven’t changed their plans due to the threat of COVID-19, according to a Canadian Underwriter survey conducted Tuesday.

Almost 600 industry members responded to the poll, which was conducted online one day before the World Health Organization deemed the virus to be a global pandemic (as opposed to an epidemic, which only affects certain areas). In just two days since the poll was conducted, things have changed quickly in regards to COVID-19. Since CU’s poll on Tuesday, United States President Donald Trump placed travel restrictions on Europe; Canadian Prime Minister Justin Trudeau and his wife have gone into self-imposed isolation to test for COVID-19; and the sports world has started to shut down over concerns about transmitting the virus.

Specifically, the National Basketball Association announced the postponement of its season following a positive test of one its players. On Thursday, the National Hockey League hit the pause button on its season. College basketball tournaments have been cancelled; and it’s expected that Major League Baseball will halt its operations as well. 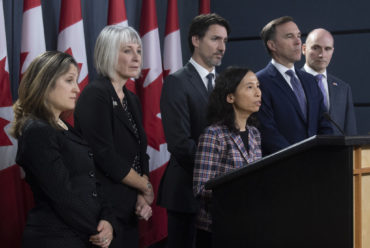 Contrast that with potential travel abroad for an industry event. More than two-thirds (67%) of respondents said they were either not very or not at all comfortable with travelling internationally to attend an industry event. Just 17% had at least some level of comfort in doing so.

For the time being at least, industry professionals don’t appear to be changing their travel plans, although rumours abound about some insurance carriers considering corporate travel bans.

More than half (56%) of the surveyed industry professionals said they haven’t changed their plans to attend industry events within Canada. Another 23% were thinking about it, while 21% said COVID-19 has changed their travel plans.

In terms of precautions, when it comes to dealing with clients, nearly 40% said they have made no major changes. Many (38%) have made greater efforts to sanitize meeting areas; some report holding more conference calls (33%) or video calls (26%); and 15% say they have cancelled meetings. Many respondents wrote in that they’re no longer shaking hands. While some noted elbow-taps or fist-bumps instead, others reported that no physical contact at all is taking place.

When asked what steps their organizations have taken to reduce the potential spread of the virus in their workplace, increased hand sanitizers (71%) topped the list. Employers have also informed employees about an emergency preparedness plan (39%), sick policies (55%) and encouraged employees to work from home (37%).  One-quarter said they’ve reduced in-office client meetings.

Overall, 54% of respondents said COVID-19 would have “some” impact on the P&C industry in general, with another 13% predicting a significant impact. As for how the economic fallout from COVID-19 will negatively affect their organization’s financial results, 44% said they didn’t know or that it was too soon to tell. Just 22% didn’t believe there would be any negative fall out while 34% think there will be.