How the economic recession changed the game for Canadian brokers, insurers

The COVID-19 pandemic has pushed broker to be more than just advisors of insurance coverage — they’re offering broader financial guidance and services to their clients.

Meanwhile, the economic recession resulting from the pandemic shifted the carriers’ focus towards “operational cadence,” meaning that the insurers’s role became one of managing the underlying conditions in the marketplace, as opposed to focusing more narrowly on solvency and liquidity issues.

The recession also serves as a cautionary note to carriers that rely on investment income to offset poor underwriting results, according to panellists on Canadian Underwriter’s webinar Tuesday, COVID-19 and the Economy: The Impact of the Recession on the Canadian P&C Industry.

“As soon as the pandemic was announced, we [brokers] certainly have been faced with a lot more work than we’ve actually had to navigate [before],” said Roger Hacala, national practice leader of BFL Canada Risk & Insurance Services. “A lot of that [is because] a lot of businesses [are] suddenly being shuttered, and us having to worry about what that means for the clients.”

Client revenues dropped and brokers were helping them figure out what that meant for a business as a whole. “We’ve seen that some companies are saying, ‘We’re not going to re-open, there’s no way we can. We’re in a bankruptcy situation,’” Hacala said.

That pushed brokers to work harder than they ever have before to help their clients, he added.

“The thing is, we’ve been able to find solutions for our clients, which is the biggest thing [now that] we’ve seen capacity cuts and premiums going up despite the current market— we are finding solutions,” said Hacala, who is also past president of the Toronto Insurance Council. “But it’s more a matter of having to lead them through, ‘What does it mean from a financing standpoint?’ Even other aspects of their business — from the operational side. So it’s gone beyond just talking about the insurance consulting of what we do.”

Hacala noted the year began with hard market conditions, so it was no picnic in the first place. Fellow panellist Saad Mered, CEO and chief agent of Zurich Canada, agreed. The challenges weighed on insurers as well. Then the pandemic hit just before mid-March. 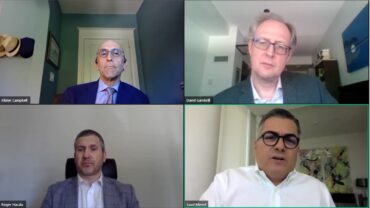 “The initial reaction [of insurers generally] was really a three-pronged approach to where we were,” said Mered. “It was a solvency question; it was a liquidity question; and it was an operational cadence question.

“As the first two, three weeks [of the pandemic] went on, it quickly became obvious … that the solvency and liquidity questions became less essential and less obsessive and a lot of management time focused on operational cadence.

“I think operational cadence is really what threw a lot of our collective professionals in the insurance industry into a very challenging environment — managing the underlying conditions in the marketplace.”

One challenge is that different segments and sizes of commercial clients were all affected in their own way by the onset of the pandemic, he added. “It’s amazing how we’ve seen the insurance procession across the board react positively and rallying to the challenge and rallying to the crisis in a way that, I think, that speaks to who we are.”

But there’s still plenty of reason to remain cautious, said panellist Alister Campbell, president and CEO of the Canadian Property and Casualty Insurance Compensation Corporation (PACCIC). The industry was well-capitalized going into the crisis. Even if some were struggling with underwriting profits, investment income was offsetting that.

But now things have changed.

“It’ll be fair to say that there are some large insurers that have failed to generate combined rations under 100 for a number of years in a row,” Campbell said. “And when you have a suddenly-unsettling crisis in equity markets, that causes some question marks for sure.”

Still, Canadian P&C insurers seemed okay, since half held no equities in their portfolios at the end of 2019. So when the stock market plummeted, the effect on carriers was less pronounced. But there went their profits via investment. So it’s no longer something on which they can depend.

“There are more than enough of those [carriers depending on investment income] to start paying attention to, especially if they’ve been making a habit of that over prior years,” Campbell said.