With wildfires raging in northern Alberta and Ontario, brokers are reporting some funky outcomes associated with insurers’ binding authority restrictions. 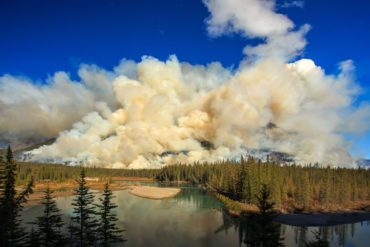 “Like most insurers, we won’t bind any new risk located within 50 kilometres of an area that is under a wildfire alert or an evacuation order issued by a civil authority,” Janis McCulloch, a spokesperson for Aviva Canada, told Canadian Underwriter Wednesday. “This restriction remains in place until the alert or evacuation order is lifted. During this time, we continue to provide coverage for existing policies.”

Edmonton-based Peace Hills Insurance, which has branch offices in Calgary and Vancouver, also has binding authority restrictions in place. Binding authority will be temporarily suspended for adding or increasing coverage on new or existing property where any risk of imminent threat of damage exists, not just wildfires, the insurer’s marketing and communications advisor Katie Keeling said Tuesday.

The rationale for having these restrictions in place is to ensure opportunistic individuals cannot take advantage of a likely or predictable unfortunate event, Keeling said. “Insurance is meant to provide a peace of mind rather than a last-minute effort to protect yourself in fear of imminent threat.”

But some brokers have told Canadian Underwriter that blanket wildfire binding restrictions are creating challenges for them and their clients.

Wildfires raging near High Level, Alta., have already forced an estimated 10,000 people from their homes, invoking memories of Canada’s largest insured loss event – the Fort McMurray wildfire in 2016 that resulted in about 88,000 evacuations and $4 billion in insured damage.

Jamie Martyn, president of Kennedy Insurance Brokers in North Bay, Ont., said last summer was the first time he has dealt with some of the more significant restrictions he has seen in about 20 years. In some cases, existing clients were not able to make some “standard changes and substitutions,” he reported. In one case, the brokerage had to re-market a client for a tenant’s policy. “That’s extra work we don’t need to do,” he said.

In another example, fires near Parry Sound, Ont. last year – which burned about 100 kilometres away from North Bay – created binding restrictions for brokers doing business in North Bay. Martyn said one client was moving one kilometre within North Bay, from their old home to their new home, but the brokerage couldn’t bind cover on their new home because of the fires near Parry Sound.

Martyn said the fires in the Parry Sound area would have to had to have travelled around the large Lake Nipissing to reach North Bay. “It would burn down several communities before it even got to North Bay,” he said. And yet, the restrictions made it impossible to bind coverage on the client’s neighbouring home within North Bay.

“It’s hard to explain to that client,” Martyn said.

Last year’s wildfire season was challenging for a broker based in Burnaby, B.C. “Last year, we were basically waiting to send or bind terms until the day before [the policy] renewed,” said Sarah Thompson, associate vice president of Hub International’s real estate practice. “We were having challenges even in downtown Kelowna getting insurers to bind or quote on new business for us.”

Earlier, in mid-May, Thompson said: “Right now, I do see the challenges going forward this summer, even in terms of being able to renew some of those properties if the fires continue.”

Have Aviva or Peace Hills Insurance heard any concerns from brokers on the issue? “Not really, because this restriction is typically enforced by all insurers in Canada, and has been a rule for quite some time,” McCulloch said. “However, there can occasionally be exceptions to the rule, which is why we encourage our broker and agent partners to reach out to us to discuss a particular risk being considered.”

Keeling said no binding authority restriction concerns have been brought forward from their brokers. “It’s considered common practice across the insurance industry,” she said.

More News
Related
Why your clients may not be covered when there’s an active wildfire
Automated online office insurance “could make brokers redundant”: B.C. brokerage
How to sell commercial coverage to small businesses
Quality of construction workmanship a major factor in water losses: RSA Canada CEO