Despite re-openings, time is ticking on construction clients’ inactivity limits

A “snowball effect” could leave some construction companies facing major financial challenges despite the slow re-opening of some of their closed worksites, one brokerage warns.

In some situations, the damage may already be done, leaving brokers scrambling to help out their clients.

The inability to move projects along due to the COVID-19 pandemic, combined with a “tremendous delay” in materials being shipped globally, “is blowing timeframes and budgets out of proportion,” warned Steve Hrab, director of construction at Burns & Wilcox Canada. As delays linger, “I see a bit of a snowball effect happening here,” he said.

Would this cause construction companies to re-think their insurance coverages? Increased project costs could force them to pinch pennies elsewhere.

“I really hope not, but it may be something we do see,” Hrab told Canadian Underwriter. “We’re preparing that construction timeframes will extend, possibly double and triple, as we abide by the rules of this new world right now.” 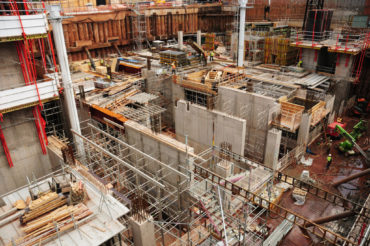 Brokers are trying to make things work for their construction clients, but there are many hurdles to jump. Hrab said one issue relates to changes in policy language to make sure that vacant sites wouldn’t go uninsured. Standard wording usually puts a limit of 30 days of inactivity.

“In the construction space, a lot of policy wordings include a statement saying that if there’s any type of inactivity on a build site, the coverage potentially can be denied,” he explained. “So this is what we’re exercising right now — this is what a lot of people are worried about right now.”

Even though the 30 days of inactivity is beyond the construction company’s control, it’s still possible that an insurer would deny a claim after then.

So the clock is ticking on many build sites. Fortunately, some have been able to extend that period to 60 days. “My team is flagging policies to ensure that we’re not exceeding that time,” Hrab said. “If we are exceeding it, then we’re going to have to look at possibly moving this over to another coverage, and a less-stripped-down coverage that our P&C department could offer. Basically, offering basic dwelling coverage on these sites right now with the inactivity. But for the time being, we’re offering our broad form coverage on the first 60 days right now.”

Some provinces are opening up and construction can resume in some parts. That should bring some relief, but not everything is clear, Hrab said. “Although exceptions and adjustments have been made for projects that had begun prior to the shutdown, there was still a lot of uncertainty with how to proceed. A site on pause for a month doesn’t raise too many concerns, but a site that isn’t allowed to remain active for half a year is a different story regarding the risk factors involved.”

Another red flag these days is construction projects starting without adequate insurance coverage. This is always a concern, Hrab said, but it seems to have picked up recently.

“It happens,” he said. “There’s always an education on construction policies, whether it be renovations where a property owner assumes their property policy would respond to [a claim], when in fact it wouldn’t; or their policy would extend to a new construction where it wouldn’t; or they would need to have construction at a certain time of the build, when we should have taken it at the beginning. We get a lot of people doing the one-offs and the reason is a lack of education about these kinds of projects. I think the bulk of our business in the last month have been projects already started.”