What can P&C insurance learn from racial bias in other financial services?

Some financial services have begun to implement solutions to determine if there’s racial bias in lending and credit rating practices – and it may be applicable to the P&C industry.

New research by the Casualty Actuarial Society looks to address the potential implications of racial bias in insurance pricing and guide the industry towards proactive solutions.

“We looked to other financial services industries that have implemented a variety of solutions to address racial bias. Specifically, we looked at mortgage lending, personal lending, commercial lending and the underlying credit scoring systems. And we hope to learn more about those practices to see what we could take away to help inform the insurance industry,” Mallika Bender, CAS fellow and contributing researcher, said in a press briefing.

First, the research in other financial service areas notes the homeownership and wealth disparity between white and minority consumers is a result of the “long history of explicitly racist practices in the real estate and mortgage industries.”

CAS research noted uses of match pair testing to measure home loan practices. They uncovered significant differences in loan rejection rates by race. In one graph, match-pair testing shows that 96% of non-minorities interested in a mortgage were encouraged to apply, compared to only 80% of minorities. 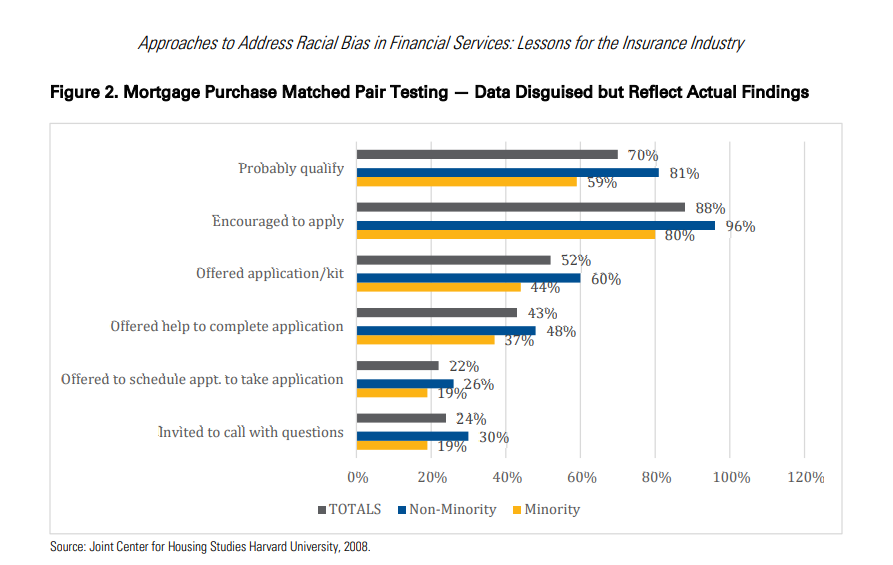 These outcomes pose the question of whether match pair testing can be used in P&C insurance “to identify racial bias in underwriting, marketing or claims practices for personal insurance,” the paper reads.

On top of match pair testing, governments have intervened – such as the Housing Finance Agency (HFA) loans in the U.S. – to make housing more affordable, in an effort to address institutional bias. However, the paper concludes that governmental solutions alone cannot fix the problem.

Personal and commercial lending also poses a major problem for minorities. Hispanic and Black individuals are more likely to be “unbanked” or “underbanked” than white individuals and Black-owned businesses face similar results.

Racial bias can be found in credit algorithms, face-to-face lending and access to banking, but the paper suggests ways to mitigate these biases through a few methods, namely AI.

Some lending products use AI to improve fairness. The paper notes this could have practical uses for “ratemaking and many other applications in the insurance industry.” But researchers note there is a potential for the AI to become biased itself.

Other solutions for personal and commercial lending include Community Development Financial Institutions (CDFI), which revitalize low-income and minority communities through investments.

“The insurance industry may benefit from considering a multi-party approach to identify and address potential issues of racial bias in insurance practices,” the research suggests.

Credit scoring also suggests a major disparity between minorities and non-minorities. Previous research finds Black and Hispanic populations have a higher rate of no credit history and unscored credit records, making them unable to access loans.

One potential solution to racial bias in credit scoring is the use of “alternative data,” like rental payments, utility payments and affiliation with community groups to determine credit algorithms.

The researchers note this type of data results in higher acceptance rates for loan applications among all, including minorities – it led to a 22% increase in acceptance rates for Hispanic consumers, 21% for Black consumers, 14% for Asian consumers and around 8% for White consumers. Credit bureaus like Equifax, Experian and TransUnion have already begun using alternative data.

Mosley notes regulators are considering actions to prohibit certain practices or certain rating factors or looking for additional monitoring and controls on data and controls on modeling practices.

One area in P&C insurance could be a source for unintended bias, the researchers noted. A main underwriting consideration in determining if a home is insurable is the “maintenance and upkeep of the home.”

“What if the reason that the electrical system and roof have not been updated is because the homeowner did not have the resources to pay for these updates, or financial institutions were less willing to lend money to the homeowner to make these updates?” the researchers pose in the paper.

“In this case, the insurance industry is not intentionally biased against areas, but simply reacting to data. But there could be some unintentional bias given that areas that historically were redlined could possibly be charged more based on the condition of the home,” said Roosevelt Mosley CAS fellow and researcher in the press briefing.