200-year loss scenario from flood in Canada could produce insured losses of $5.7 billion: Swiss Re

Flood is clearly the number one peril in Canada, with Swiss Re estimating that a “perfect storm” flood scenario would result in economic losses of $13.8 billion and insured losses of $5.7 billion.

Developed using the company’s new probabilistic flood model, the estimate of a 1 in 200-year flood represents almost three times the losses resulting from the flooding in southern Alberta three years ago. 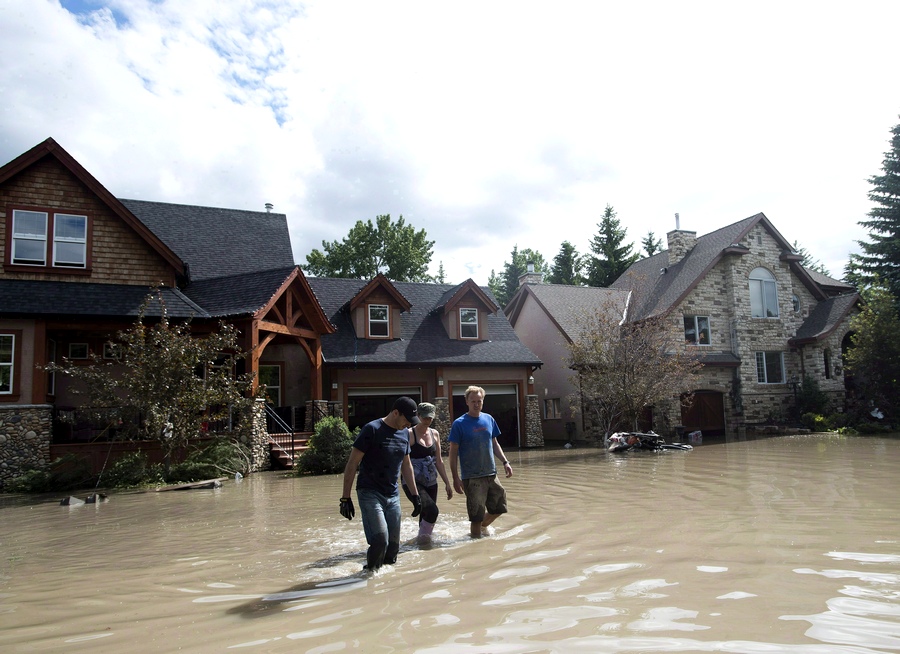 Residents walk through flood waters in Calgary on June 24, 2013. THE CANADIAN PRESS/Nathan Denette

The report released Wednesday morning, The Road to flood resilience in Canada, notes that Canada-wide, a 200-year loss scenario likely would feature extensive flooding covering multiple provinces in western Canada in spring and early summer as a result of rainfall combining with snowmelt to create large flow.

Overall, there is a clear spike in flooding events during the early spring and summer months, Swiss Re reports.

Looking at the impact of a 200-year loss event by province, it notes the following:

There is little indication that flood-related events – representing about half of all natural disasters in Canada since 1970 – will lessen in future. The report, in fact, sees frequent flood events becoming an even greater risk.

“Flood disasters have been a reality in Canada for more than a century, but as a direct result of increasing value concentration in high-risk areas, deteriorating infrastructure and climate change, the frequency and severity of these events are steadily increasing,” states the report.

The main types of floods that affect Canada are pluvial flood (or torrential rainfall), fluvial (or river) floods, coastal flood and reservoir flood. “Fluvial and pluvial floods pose the largest loss potential. Often a clear distinction is difficult, as many fluvial floods coincide with local pluvial ones,” the report explains.

The 220 disasters that triggered payments under the current federal Disaster Financial Assistance Arrangements (DFAA) from 1970 to 2014 resulted in combined total compensation of $6.8 billion, three-quarters of which ($5.2 billion) are attributable to floods.

Swiss Re regards a fully probabilistic flood model as an essential tool for accurate risk assessment of nat-cat perils. Its new model – combining hazard, vulnerability, value distribution and insurance conditions – was used to develop the loss estimates and is an event-based loss tool suitable for both single location and portfolio risk analysis.

The model’s event-set generation method consists of a rainfall-runoff model, a routing model, a statistical model and an event-set generator. The fluvial component is calibrated to Canada’s extensive network of gauged rivers.

Consider the 2013 floods in southern Alberta. “The total economic damage for the province of Alberta was devastating. Economic losses exceeded $5 billion, while insured losses totalled $1.9 billion, making this event the costliest disaster in Canadian history, surpassing the 1998 Quebec ice storm,” the report notes.

Add to the anticipated increase in flood events that the divide between economic and insured losses means the bulk of recovery would fall to governments and taxpayers, Swiss Re points out.

“The southern Alberta floods and the Toronto flash flood of 2013 are clear examples of how wide the insurance protection gap actually is in Canada,” the report notes. Disaster cost relative to insured assets has tripled since 1970, with 55% of weather-related losses having been uninsured from 1980 to 2013.

“Flood poses a risk to individuals, business and the public sector,” it states. Swiss Re’s assessment shows that floods cause annual average economic losses of more than $1.2 billion. With $800 million of these losses being uninsured today, it notes, homeowners bear 75% of the burden.

“Despite the high number of disasters, residential homes have either remained financially unprotected or only marginally protected from the impact of flooding losses,” the report notes. “While insurance can be purchased for some water-related perils in Canada, comprehensive residential flood policies were not available until recently and still remain very sparse today,” it adds.

“Flood risk can and should be managed using physical, social and economic means,” Swiss Re emphasizes. “Concerted action across the risk management chain that involves all key stakeholders – government, the insurance industry and homeowners – is crucial.”

Among other things, Swiss Re recommends the following measures: 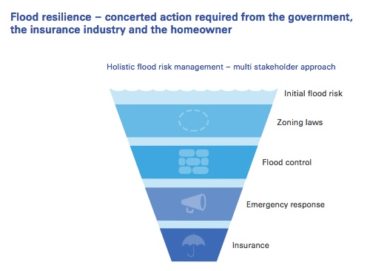 “A collaborative effort between all key stakeholders to assess and share the risk and execute pre-and post-event mitigation strategies is – we believe – the solution to community resilience,” Swiss Re notes.

“As a result of improvements in flood modelling, the Canadian insurance industry is, for the first time, in a strong position to offer a suite of fully private flood insurance solutions to the vast majority of Canadians,” the report states. “Most residential properties in Canada could be insured against the flood peril through regular insurance on a private and voluntary basis.”

For high-risk residential properties, however, “the government could subsidize part of the premium” for these properties. “However, the monetary quantification of the actual flood risk needs to be made transparent to the homeowner as a way of building more robust risk awareness and shifting the onus to individuals over time,” the report adds.

1 Comment » for 200-year loss scenario from flood in Canada could produce insured losses of $5.7 billion: Swiss Re