More than 200,000 homes in Texas at potential risk of storm surge damage from Hurricane Harvey: CoreLogic

More than 200,000 homes along the coast of Texas with a reconstruction cost value (RCV) of approximately US$39.6 billion are at potential risk of storm surge damage from Hurricane Harvey, CoreLogic suggested late Thursday.

Irvine, Calif-based CoreLogic, a global property information, analytics and data-enabled solutions provider, released data analysis showing that 232,721 homes along the Texas coast are at potential risk of storm surge data from the hurricane, based on Category 3 predictions. Current projections do not expect Hurricane Harvey to exceed a Category 3 storm, CoreLogic added in a statement.

According to the U.S. National Hurricane Center (NHC), Category 3 (major) hurricanes consist of sustained winds of 111 to 129 miles per hour (178-208 km/h). “Devastating” damage will occur, including well-built framed homes may incur major damage or removal of roof decking and gable ends. Trees will be snapped or uprooted, blocking numerous roads and electricity and water will be unavailable for several days to weeks after the storm passes, the hurricane center said.

The Core Based Statistical Area (CBSA) of Houston-The Woodlands-Sugar Land would see the most total number of homes at risk from a Category 3 storm at 118,138, the CoreLogic data showed, with an RCV of US$20.8 billion. The second highest CBSA is Beaumont-Port Arthur, with 75,567 homes at risk and a total RCV of US$12.1 billion.

CoreLogic explained that the RCV is the cost to completely rebuild a property in case of damage, including labour and materials by geographic location, assuming a worst-case scenario at 100% destruction. The CoreLogic analysis measures exposure to damage from storm surge and does not include potential damage from wind and rain associated with hurricanes, the statement pointed out. The analysis encompasses single-family residential structures less than four storeys, including mobile homes, duplexes, manufactured homes and cabins, among other non-traditional home types. 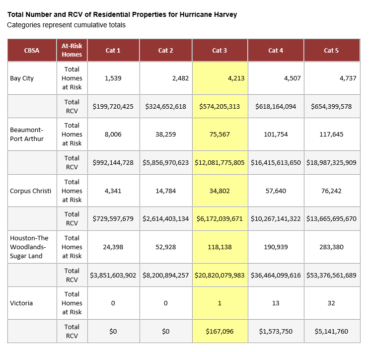 Catastrophe modelling firm AIR Worldwide said in a media advisory on Thursday that Hurricane Harvey is expected to make landfall as a Category 3 storm Friday evening or Saturday morning near Corpus Christi.

“The first hurricane to strike Texas since 2008, Harvey brings the threat of strong hurricane winds, life-threatening storm surge, and days of heavy rain – which could cause dangerous inland flooding – to Texas, Louisiana, and possibly Mexico,” the advisory said. “Although much uncertainty remains about the storm’s track and speed post landfall, some forecasts suggest the storm system will stall over land, which could result in 12-20 inches of rain through Wednesday, August 30, in many areas, and as much as 30 inches in some locations.”

For the United States, storm surge, hurricane and tropical storm warnings and watches have been issued for a vast area, stretching from the mouth of the Rio Grande to High Island, east of Galveston. In addition, many inland cities, including Houston and San Antonio, could be impacted by heavy rainfall, AIR said in the advisory.