More than 220 evacuated from homes after Gatineau flooding

Hundreds of people in Gatineau, Que. have been evacuated from their homes after heavy rainfall caused flooding. 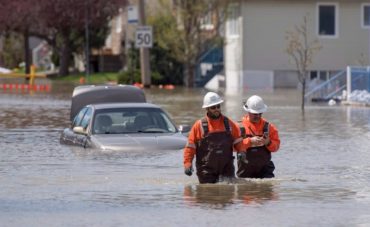 Workers wearing hip waders pass a submerged car as they walk on Rue Saint-Louis in Gatineau, after flooding caused by significant rainfall, on Wednesday, May 3, 2017. THE CANADIAN PRESS/Justin Tang

The City of Gatineau said in a statement that as of early Thursday morning, 223 people and 130 homes had been voluntarily evacuated. There were also 126 homes with gas shut offs and five homes with power shut off.

Numerous streets were completely closed to traffic or restricted to local traffic only. In a flooding situation, the city closes streets when too much water has accumulated on the roads, posing a hazard for residents from debris, electric wires, deteriorated or unstable pavement, among other things, the city explained.

Wastewater systems were full of floodwater, the statement added.

The Canadian Press reported on Wednesday that rising water levels continued to flood various regions in Quebec, with parts of the Montreal area hit particularly hard by heavy rains. The community of Rigaud bore the brunt of the heavy rain, with more than 30 families forced to evacuate. Mayor Hans Gruenwald Jr. estimated that about 400 homes could be affected.

Environment and Climate Change Canada is forecasting a reprieve in rainfall until Thursday night, the statement said, but more than 50 millimetres of rain is expected in the city by Sunday.

ch de la Pointe-Séguin in Rigaud. Residents+officials fear water could rise back to levels of the last flood. pic.twitter.com/YuZJZkOlk8

Heading up in a helicopter to capture aerials of the flooding in west Quebec. Water levels reach 20-yr-high #ottnews pic.twitter.com/4WTcrX3cMd