A 4.8 magnitude earthquake that “rattled residents” and damaged buildings in East Texas in 2012 was triggered by the injection of large volumes of wastewater from oil and gas activities into rocks deep beneath the surface, confirmed a new satellite study. 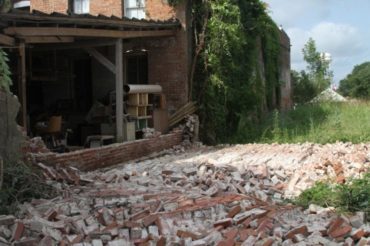 This wall collapsed in Timpson, Texas, following a 4.8 magnitude earthquake in 2012. A new satellite study confirms the temblor was induced by injection of large volumes of wastewater from oil and gas activities. (Image credit: East Texas Press)

The study, titled Surface uplift and time-dependent seismic hazard due to fluid injection in eastern Texas, was published in the journal Science late last week. The largest recorded earthquake in East Texas was triggered by the high-volume injections of wastewater from oil and gas activities deep underground, according to the study, co-authored by Stanford University geophysicist William Ellsworth.

Geophysicists have long suspected that the 2012 temblor, which was the largest ever recorded in the region and followed by several strong aftershocks, was a manmade, or “induced,” quake resulting from the activities of nearby wastewater injection wells, but definitive proof had been lacking until now, according to a press release from Stanford University.

“Our research is the first to provide an answer to the questions of why some wastewater injection causes earthquakes, where it starts and why it stops,” said Ellsworth, a geophysics professor at Stanford’s School of Earth, Energy & Environmental Sciences, in the release.

For the study, Ellsworth and his co-authors used a remote sensing technique called Interferometric Synthetic Aperture Radar (InSAR) to measure ground deformations near the wells in East Texas where the quake occurred. InSAR satellites use radar to detect tiny, centimetre-scale changes in the shape of Earth’s surface, the release explained.

The team focused on four high-volume wells used for disposing wastewater, located near the town of Timpson, Texas, where the quake was centered. The four wells began operations between 2005 and 2007 and at their peak injected about 200 million gallons of wastewater per year underground.

The study found that where the wastewater was injected can make a “huge difference.” Injecting wastewater at a depth of over one mile, two of the wastewater disposal wells the scientists examined lie directly above where the earthquake occurred. The other two wells injected similar volumes of wastewater, but at shallower depths, just over a half mile below the surface.

The InSAR measurements revealed that wastewater injection at the shallow wells resulted in detectable “ground uplift” up to five miles (eight kilometres) away but only a modest rise in pore pressure. Pore pressure is the pressure of fluids within the fractures and cavities of rocks at the depth at which earthquakes happen two or more miles below the surface. Increasing pore pressure within a geologic fault can cause the two sides of the fault to slip and release seismic energy as an earthquake, the release said.

This did not happen at the shallow well sites in East Texas because a thick layer of nearly impermeable rock beneath the injection sites of the shallow wells prevented the pore pressure from migrating downward towards the crystalline basement, a deep and faulted rock layer where earthquakes originate. Instead, the injected wastewater caused a subtle uplift of several centimetres over a broad area around the injection wells, the release said.

The situation was different at the deep-well injection sites. There, the combination of stiffer rock and the impermeable “blocking formation” above allowed the rising pore pressure to migrate downward and build up until it triggered earthquakes in 2012 along an ancient fault line. The quakes ended in late 2013, when pressures began to decline after wastewater injections were scaled back considerably, Stanford reported.

The new findings highlight the importance of understanding the local geology for wastewater injection operations, the scientists said. “The recent upturn in seismicity in Oklahoma and Kansas commonly happens where injection occurs close to the crystalline basement, so we’re getting lots of earthquakes in those places,” Ellsworth said. “Injecting at shallower depth above a blocking formation would reduce the ability of the pore pressures to migrate to the basement and activate the faults.”

The research also demonstrated the potential of remote sensing for understanding how and where pressure changes move through Earth. “Moving forward, we need to predict where pressures will increase in order to reduce the potential for inducing earthquakes,” Ellsworth said in the release. “Our research uncovers new possibilities for operating wells in ways that reduce earthquake hazard.”