FAIRVIEW, Okla. – The third-largest earthquake in Oklahoma was likely triggered by underground disposal of wastewater from oil and natural gas production, the United States Geological Survey found in a report issued Monday.

The magnitude 5.1 quake that struck northwest of Fairview in February was likely induced by distant disposal wells, the agency said. The USGS report indicated that in the area around where the Fairview quake occurred, the volume of fluid injected had increased sevenfold over three years.

The Fairview temblor had been the largest in the central and eastern U.S. since a magnitude 5.7 quake hit near Prague in 2011. In September, the largest earthquake in the state struck near Pawnee with a magnitude 5.8. The relationship between that quake and wastewater injection is still being studied. 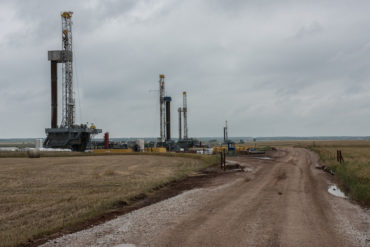 A study by the U.S. Geological Survey last year suggested that the sharp rise in earthquakes in Oklahoma in the past 100 years had likely been the result of industrial activities in the energy-rich state, such as oil and natural gas production.

Geologists say earthquakes of magnitude 2.5 to 3.0 are generally smallest that are felt by humans; damage is not likely in quakes below magnitude 4.0.

In response to research suggesting a wastewater disposal-earthquake link, state regulators have ordered the shutdown of some disposal wells and asked producers to reduce disposal volumes in earthquake-prone regions of the state.