The catastrophe loss ratio, over 10 years, was 10 points lower than the modeled expected cat loss ratio in homeowners’ insurance in the United States, Aon plc suggested in a report released Monday. 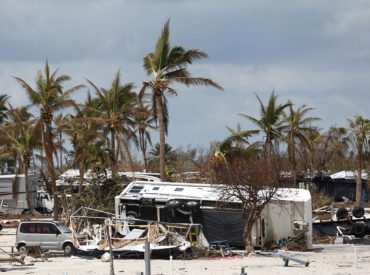 FILE – In this Sept. 13, 2017, file photo, overturned trailers and debris sit at the Sunshine Key RV Resort, in Big Pine Key, Fla. When Hurricane Irma slammed into the Lower Florida Keys, it destroyed or severely damaged nearly all of the area’s mobile homes where many of its service industry workers live. Business owners and county leaders are racing to secure temporary housing for those workers while trying to preserve the island chain’s small-town, mom-and-pop atmosphere. (AP Photo/Wilfredo Lee, File)

The data is based in part “on industry aggregate state level statutory financial filing information along with rate filings and supporting actuarial information for the 20 top US homeowners’ insurance groups by state,” Aon Benfield noted.

Hurricane Sandy was downgraded to post-tropical storm status when it made landfall about 200 km south of New York City in late October, 2012.

“2016 ended the dearth of hurricane activity that was the boon of gulf coast carriers for nearly ten years,” Aon Benfield said in Homeowners’ ROE Outlook. “The gulf states plus Florida had 30 points of favorable results relative to expected from 2007 through 2016, and as of the time of this publication, even with Harvey and Irma, that favorable experience is more than 24 points of performance lift.”

“The rate of growth has slowed from prior years and slower growth is expected in the near future with less aggressive but positive rate change in the pipeline.”