JOHN’S, N.L. – The mayor of St. John’s, Nfld. says the cleanup after last month’s fierce blizzard could cause the city to blow its snow-clearing budget by several million dollars.

Newfoundland and Labrador’s capital was under a weeklong state of emergency after the record-breaking Jan. 17 blizzard that brought more than 76 centimetres of snow in one day.

Mayor Danny Breen said the city estimates its 2020 snow-clearing budget, set for $17.5 million, could be exceeded by up to $5 million, putting the total costs in a range of $22 million. 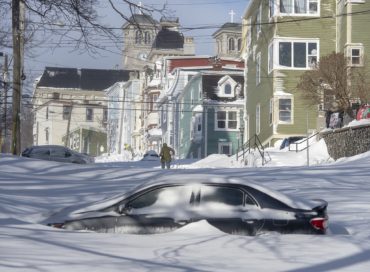 A half buried car is parked in St. John’s on Saturday, January 18, 2020. The state of emergency ordered by the City of St. John’s is still in place, leaving businesses closed and vehicles off the roads in the aftermath of the major winter storm that hit the Newfoundland and Labrador capital. THE CANADIAN PRESS/Andrew Vaughan

Breen said the ultimate total will depend on weather for the rest of the season and how much disaster relief funding the city may receive from the federal government.

The mayor said the city may also tap into reserve snow-clearing funding of $2 million, use surpluses from previous years or reduce spending, either by delaying new purchases or putting off replacing old equipment. He stressed that residents won’t bear the load of the extra costs.

He said workers are “still busy cleaning up the city,” a monumental task he expects will likely continue until the end of winter.

St. John’s budgets for approximately 350 centimetres of snow each year _ a total Breen said the city was close to reaching as of Wednesday, while the region was under yet another snowfall warning from Environment Canada.

City workers were playing catch-up from previous weather events by the time the extreme storm hit on Jan. 17, and the cleanup after a Dec. 24, 2019, snowfall also ate into the budget.

Residents have shared concerns about sidewalks covered in ice and snow, forcing pedestrians to share roads with cars. Breen said workers are making their way through sidewalks and a review at the end of the winter will consider new approaches to sidewalk clearing.

“There is frustration, and we’re working through the sidewalks and getting there as quickly as possible,” Breen said.