The government of Alberta announced on Monday that it has tabled a bill introducing measures aimed at reducing the number of wildfires caused by humans and enhancing firefighting operations in the province. 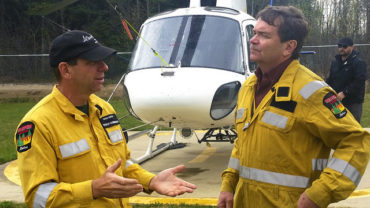 Agriculture and Forestry Minister Oneil Carlier (r) in Fort McMurray speaking with Alberta Wildfire officials during the Horse River Wildfire in May. Photo: Government of Alberta.

“Far too many wildfires are triggered by human activity and we need to take proactive steps that will help reduce the risk of this happening,” said Oneil Carlier, Alberta’s Minister of Agriculture and Forestry, in a press release. “This important legislation will improve our ability to decrease the number of preventable fires, while also strengthening provisions that support the efforts of our wildfire fighters to keep Albertans and their communities safe.”

About 70% of wildfires over the last five years have been linked to human activity, the release said.

In 2016, Alberta wildfire crews fought more than 1,300 fires, including the 589,552-hectare wildfire that forced the evacuation of Fort McMurray in May and destroyed portions of the city and surrounding communities. Catastrophe Indices and Quantification Inc. (CatIQ) estimated in July that insured damage from the Fort McMurray wildfire was $3.58 billion – 62% in personal property, 33% in commercial property and 5% in auto losses.

In 2011, another major blaze – the Slave Lake fire – struck the town of the same name, causing an estimated $700 million in insured damages.

“The Town of Slave Lake takes wildfire very seriously as we have seen firsthand the power these fires have,” Tyler Warman, the mayor of Slave Lake, said in the release. “We welcome any changes to the [Forest and Prairie Protection Act] that will make it easier for the province to deal with these extraordinary events that have such an impact on our day-to-day lives.”