The Government of Alberta, in partnership with the Regional Municipality of Wood Buffalo (RMWB), is moving forward on initial steps to support small- and medium-sized businesses in their re-entry with a small business support centre. 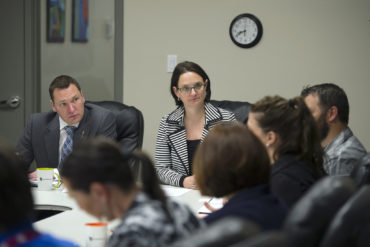 Government has also confirmed its intention to prefer local companies in recovery contracts. A statement from Alberta’s Office of the Premier on Friday said that employers in Fort McMurray have received four out of every five recovery contracts. “Of the 532 contracts signed by the Regional Emergency Operations Centre so far, about 80% are with local employers from the Fort McMurray area,” the statement said.

Any business that is either locally owned or employs people in the Fort McMurray area is considered a local employer. Businesses from outside the region are only contracted if there are no local businesses in a position to do the work. These are usually for complex projects that require specific expertise not available locally, the statement explained.

“Businesses in Fort McMurray were already struggling from the prolonged collapse in the price of oil,” Deron Bilous, Minister of Economic Development and Trade, said in a separate press release on May 26. “The wildfire and subsequent evacuations have had a devastating impact on employers in the region. In co-operation with our partners – from insurers to the Red Cross – we are committed to assisting employers in the Fort McMurray area to get access to the resources they need in their return to the community.” 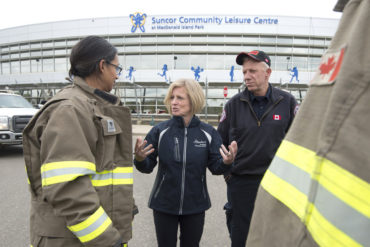 The province announced its intention to work with local suppliers for any recovery-related procurement under provincial jurisdiction, providing a preference for competitive bids from local firms. Photo: Government of Alberta.

The provincial government announced its intention to work with local suppliers for any recovery-related procurement under provincial jurisdiction, providing a preference for competitive bids from local firms. The Government of Alberta will also provide support to an on-the-ground small business support centre, partnering with the RMWB, targeted at providing a space for businesses to get access to information, workspace and information on recovery-related contracts.

“The RMWB shares the Government of Alberta’s commitment to supporting small business in their return to Fort McMurray, and in providing opportunities for local companies with competitive bids in the municipality’s contracts for rebuilding,” said Melissa Blake, Mayor of the RMWB. “Fort McMurray should rebuild Fort McMurray.”

As of 2 p.m. on May 29, the Fort McMurray wildfire was estimated to cover 579,946 hectares, including the Saskatchewan side. According to the provincial government, “work is still on track to begin voluntary phased re-entry of residents on June 1.

#ymmfire just drove through, no smoke, air isn't bad but pls do not Rush.devastation is unreal bring water and food pic.twitter.com/ehvHRPfiYZ

Researchers already on the ground to study #ymmfire. This is what a hotspot looks like. @WesternPartners @NRCan pic.twitter.com/lyUV8EbVJ1

Plants spring up quickly from a seed bank in the soil after #wildfire. #ymmfire @WesternPartners @NRCan pic.twitter.com/oOZWFjoNqQ