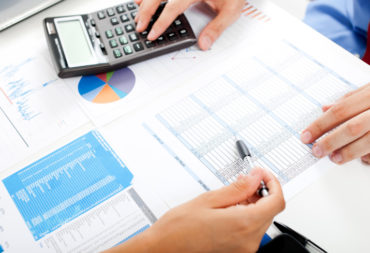 All segments contributed to the increase, Allianz said in a press release on Friday.

Operating profit also grew by 9.4% to 2.9 billion euros, driven by strong performance of the Life and Health and Asset Management business segments. Operating profit in the Property and Casualty business segment decreased due to a lower underwriting result, the release said, adding that net income attributable to shareholders fell by 15.3% to 1.8 billion euros from 2.1 billion euros, as the “prior-year quarter benefited from one-off gains from the sale of financial stakes, as well as significantly lower restructuring expenses and a lower effective tax rate.”

“Allianz saw a good start into 2017 with results putting the group on track to meet its operating profit target for the full year of 10.8 billion euros, plus or minus 500 million euros, barring unforeseen events, crises or natural catastrophes,” Dieter Wemmer, chief financial officer of Allianz SE, said in the release. “The group observed higher claims from large losses as well as natural catastrophes and still posted a strong rise in operating profit due to improvements in Life and Health and Asset Management business segments. The Group’s net income was also solid in the quarter considering the exceptionally strong year-ago period, which benefited from the sale of financial stakes.”

For the P&C segment, gross premiums written amounted to 17.7 billion euros in Q1 2017, up from 17.2 billion euros in Q1 2016. Operating profit declined by 12.7% to 1.3 billion euros compared to the prior-year quarter. This decrease was due to a lower underwriting result, driven by higher large losses, an increase in claims stemming from natural catastrophes and a negative impact from the Ogden discount rate change, the United Kingdom government’s change in personal injury compensation payments. As a result of the higher loss ratio, Allianz reported, the combined ratio for the P&C segment rose to 95.6% from 93.3% in Q1 2016. 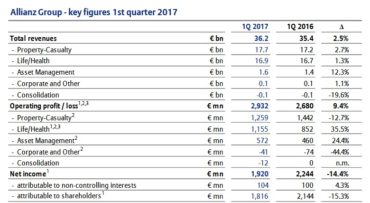 “The Property and Casualty business segment is on track to meet its full-year target despite higher quarterly charges compared to prior-year for large losses, storms in Europe and Australia, and the Ogden discount rate change,” Wemmer said.

In Life and Health insurance, statutory premiums grew by 1.3% to 16.9 billion euros from 16.7 billion euros in the first quarter of 2016. Allianz attributed the increase to “strong single premium growth from the sale of capital-efficient products in Germany and higher unit-linked premiums in Taiwan, which compensated for the decline in premiums in the United States.” L&H operating profit increased 35.5% to 1.2 billion euros from 0.9 billion euros, reflecting a higher investment margin in the U.S. due to more positive market effects.

For Asset Management, operating profit increased by 24.4% to 572 million euros from 460 million euros, primarily driven by an increase in operating revenues as a result of higher average third-party assets under management.

Allianz has more than 86 million private and corporate customers. In 2016, approximately 140,000 employees in over 70 countries helped achieve total revenues of 122 billion euros and an operating profit of 11 billion euros.