Are sandbags effective? A look at the popular flood prevention tool

For centuries, residents of flood-prone areas have looked to sandbags to stave off rising waters. Flood management experts say that while it’s easy to understand why sandbags have become the first line of defence, they may not necessarily be the best one. Here’s a look at sandbags and their effectiveness:

DO SANDBAGS WORK AS FLOOD-PREVENTION TOOLS?

It depends entirely on the type of flood. Tamsin Lyle, principle engineer at British Columbia-based flood management company Ebbwater Consulting, said sandbags can be very effective in situations where they won’t have prolonged exposure to water. Examples she cited include flash floods or holding off ocean waves that only reach impacted areas at high tide. But Lyle said sandbags lose much of their value once they become saturated with water, making them relatively ineffective in prolonged floods such as those currently unfolding in much of eastern Canada. 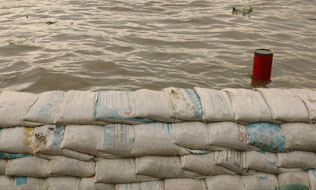 WHY ARE SANDBAGS SO POPULAR?

Lyle said the primary benefits of sandbags lie in their low cost and ease of use. Nearly anyone armed with a shovel and the right materials can construct a temporary flood barrier for next to nothing, she said, adding that pre-filled sandbags can also be stockpiled at home with relative ease. According to the Water Security Agency of Saskatchewan, optimal materials include burlap or plastic sacs filled with relatively heavy rather than gravelly soil. These factors, Lyle said, confer other “intangible benefits” that contribute to the sandbag’s popularity. ‘It makes people feel like they’re doing something,” Lyle said of filling and deploying the barriers. “It brings communities together. You feel like you’re fighting the flood.”

WHAT ARE THE DISADVANTAGES?

In addition to their lack of durability in longer-term flood conditions, Lyle said sandbags can easily spring leaks if not assembled or deployed properly. James Blatz, a University of Manitoba civil engineering professor who studied the effectiveness of sandbags, said their drawbacks become even more evident once floodwaters have receded. The bags are generally made of materials that are not resistant to UV rays, ensuring they degrade quickly. Once sand contaminated by dirty floodwaters are added to the mix, Blatz said the result is a single-use product that quickly makes its way to the landfill. He recognizes, however, that these disadvantages won’t carry much weight for people in the midst of a flooding crisis. “When there’s a flood happening, you don’t have time to sit and chat with the academics,” he said. “You put whatever you can in front of the water and do your best.”

WHAT CAN MAKE SANDBAGS MORE EFFECTIVE?

The federal government’s guide to reducing flood damage contains numerous tips for effective sandbag deployment. It suggests digging a trench to support the sandbag dike, as well as covering it with some form of plastic sheeting to further limit its permeability. Saskatchewan’s Water Security Agency and other municipal sites urge users not to fill homemade sandbags up beyond the halfway point and to ensure they overlap one another as the dike is built. Blatz echoed that advice and stressed the importance of tamping bags down with one’s feet to further compact the sand inside.

ARE THERE ALTERNATIVES TO SANDBAGS THAT MIGHT WORK BETTER?

Yes, there are several, though they can’t be deployed for the same low cost as sandbags. Lyle said an increasingly popular option is a sort of large rubber tube known as an aquadam that fills up with floodwater and creates a barrier in the process. Another option gaining popularity in Europe, she said, involves sets of interlocking blocks that can be stored in off-seasons and assembled between pillars installed outside a home. Lyle said both tools outperform sandbags, adding they also have the advantage of being reusable. But she said a crucial part of flood prevention involves governments and municipal planners being more proactive in ensuring communities are ready to react if floodwaters rise.