SHIPPAGAN, N.B. – New Brunswick’s premier says the military is sending between 100 and 150 troops to help with recovery efforts in the areas that have been hardest hit by last week’s ice storm. 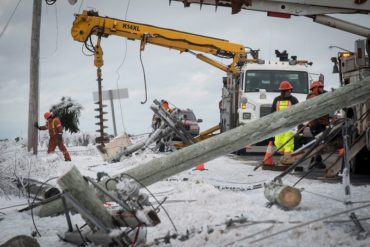 Workers tend to downed power lines in Escuminac, N.B., on on Friday, Jan. 27, 2017. Thousands of people in New Brunswick are still without power, days after a winter storm blasted through the region. THE CANADIAN PRESS/Diane Doiron

Brian Gallant told a news conference in Shippagan Sunday that soldiers are being deployed over the next 24 hours to help local authorities by going door-to-door to check in on residents, clear debris and distribute water and other essentials.

“We should see quite a presence (Monday) in the region,” Gallant says. “Everybody is in a mode in which we understand that every minute counts, every hour counts and every day counts, and we’re all focused on one thing.”

Gallant says discussions of cost have been put aside until after the crisis because “you can’t put a price on people’s safety.”

New Brunswick Power reported that more than 25,000 customers were affected by the outages Sunday, the bulk of them on the Acadian peninsula, where the impact of Wednesday’s storm has been most severe.

The Canadian Armed Forces sent in a recon team Saturday to see how to best direct their efforts in response to the premier’s request for help.

Gallant welcomed the military back-up, acknowledging there are several days of work ahead to get the entire province back on the electrical grid, especially in areas where most of the affected communities were cut off from power.

Around 350 crews worked under strenuous conditions Sunday that have stalled restoration efforts, Gallant says, such as thick layers of ice building up over gear and infrastructure.

In some areas, workers face fallen debris, high winds and extreme ice loading that has weighed down power lines, causing new outages on the Acadian Peninsula.

Gallant says the extent of the damage to electrical equipment at some sites has been more severe than expected.

NB Power estimates that between 350 and 400 poles will need to be replaced in the worst-hit areas. The utility fell short of its goal to bring back electricity to 80 per cent of the Acadian peninsula by the end of Saturday, revising its restoration target to a more modest 60 per cent by the end of Monday evening.

Gaetan Thomas, president of NB Power, says he can’t predict how long it will take to get power back up and running across the province, because crews don’t know what they’re in for until they face the situation.

“Some of the solutions have to be pretty creative,” he says. “Every corner is unique. Some are broken very awkwardly and are very dangerous.”