A winter storm that caused storm surges and extensive power outages in Atlantic Canada in early January may not have been a catastrophe event, but it was definitely significant, Catastrophe Indices and Quantification Inc. (CatIQ) told Canadian Underwriter Monday. 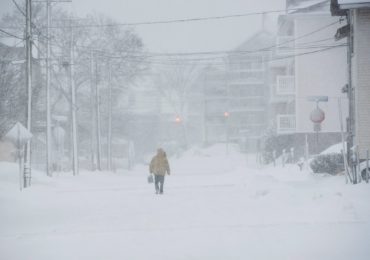 A pedestrian walks down the middle of the road on Victoria Street in Downtown Moncton, N.B., on Thursday, January 4, 2018. Atlantic Canada is being hit by a major storm storm today and over night into Friday. Some areas could see over 40cm of snow and over 100 km/hour winds. THE CANADIAN PRESS/Stephen MacGillivray

CatIQ classified the storm as “notable event,” meaning that it did not meet a catastrophe threshold of at least $25 million in property damage, but nevertheless resulted in significant losses of between $10 million and $25 million.

Insurers will not be surveyed for claim estimates since it did not meet the threshold for a cat, added Andrew McGrath, manager of media relations with the Insurance Bureau of Canada (IBC).

PCS Canada told Canadian Underwriter that it deems the losses to be a cat event for New Brunswick, Newfoundland and Labrador, Nova Scotia, Prince Edward Island and Quebec. Its preliminary loss estimate for the early January storm is expected next week.

The Atlantic Canada storm that began on the night of Jan. 4 left an estimated 125,000 customers without electricity in an area that stretched from one end of Nova Scotia to the other, Canadian Press reported on Jan. 5. The storm flooded coastal roads, battered sailboats and downed trees with hurricane-force winds, which gusted to 140 km/h.

In New Brunswick, more than 130 outages affected 11,000 customers throughout the province, which was also hit with heavy snowfall. P.E.I. was also largely in the dark.

The storm closed schools for two days in parts of New Brunswick, Nova Scotia and P.E.I. and hampered air travel and ferry service in several areas.

About one week after the winter storm, on Jan. 13, heavy winds and a downpour pummeled Atlantic Canada once again, causing two Newfoundland towns to declare a state of emergency. More than 20,000 people in the Maritimes were without power and weather reports said total rainfall amounts had exceeded 50 mm in some areas, with isolated reports of more than 100 mm in some areas.