The initial estimate of the insured property market loss for the damage caused by the earthquake in central Italy on Aug. 24 is 34 million euros, according to PERILS, the independent Zurich-based organization that provides industry-wide catastrophe insurance data. 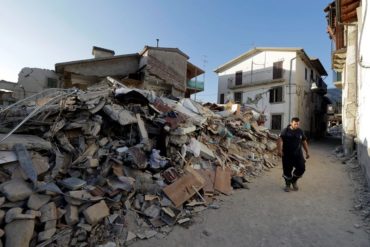 A man walks by rubble in the village of Santi Lorenzo e Flaviano, central Italy, Saturday, Aug. 27, 2016. Italians bid farewell Saturday to victims of the devastating earthquake that struck a mountainous region of central Italy this week. (AP Photo/Andrew Medichini)

The Rome-based Istituto Nazionale di Geofisica e Vulcanologia, currently the largest European body dealing with research in geophysics and volcanology, reported that the magnitude 6.0 earthquake’s epicenter was located near the borders of the Lazio, Marche and Umbria region, an area known for experiencing high seismicity. The last significant earthquake in the central Apennine mountain range occurred in April 2009 and mainly affected the town of Aquila, situated only 45 kilometres to the south of the event, PERILS said in a press release earlier this week. 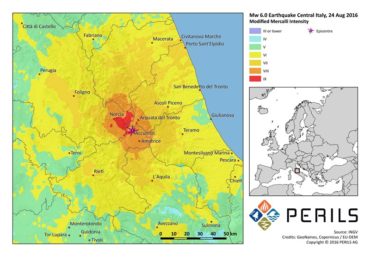 The earthquake caused the deaths of 298, mostly in the small towns of Amatrice, Accumoli and Arquata del Tronto.

The next loss report will be made available on Feb. 24, 2017 and will contain loss data by CRESTA zone, and by the property sub-lines residential and commercial.