About four months after a “substantive rainfall event” that lead to flooding in British Columbia’s Peace Region, the provincial government announced that it is providing $2.5 million to the Peace River Regional District (PRRD) to undertake debris removal and preventative work designed to reduce flood risk in the region. 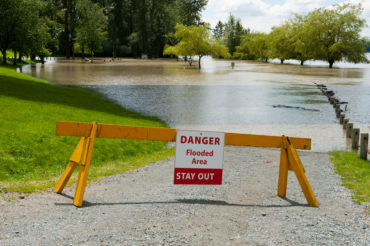 B.C. Premier Christy Clark toured the region after the event in June and committed to supporting the community during her visit, the Ministry of Transportation and Infrastructure said in a press release on Friday. The funds will support communities in the region with stream-channel restoration, or work designed to address debris buildup that leads to flooding.

The mitigation work – including debris removal, resloping and revegetation – is expected to begin immediately, before winter weather creates complications with freezing, the ministry reported. The work is part of a cross-government collaboration between the Ministry of Forests, Lands and Natural Resource Operations and the Ministry of Transportation and Infrastructure and its division of Emergency Management BC.

The total estimated cost of damages from the June Peace River rainfall event could reach close to $100 million, the ministry reported. Ministry of Transportation and Infrastructure crews and contractors have been working since the flood took place to repair roads and open up highways in the area. In total, the province already has invested $15 million for repairs.

The “very heavy rainfall event” prompted the mayor of the District of Chetwynd in northeastern British Columbia to declare a state of local emergency in mid-June. The municipality reported at the time that 79 millimetres had fallen in Chetwynd as of noon on June 15, with a further 30 to 50 millimetres expected the following day.

The Peace Region flooding also resulted in the closure of Highway 97 between McKenzie Junction and Chetwynd and at Rolla Road between Highway 49 and Highway 2.

To date, all provincial highways have been reopened, except for Rolla Road (Snake Pit) east of Dawson Creek. Work is still ongoing to repair the heavy-haul, dangerous goods route, as crews deal with challenging weather conditions. The province hopes to have the route fully open in the coming weeks, the release said.

“Following a busy summer of significant rainfall in the Peace, we wanted to show leadership in supporting work that prevents disaster in an area prone to flooding,” said Mike Bernier, MLA for Peace River South, in the release. “In fact, this investment will help to reduce the proven risk for recurring flooding in this region. By investing this money now, we are taking an important step to enhance public safety and reduce the potential for future damaging flooding for all the residents in the region.”

The $2.5 million investment is in addition to close to $1 million provided to individuals and approximately $4 million expected to be paid out to local governments in the PRRD through the provincial Disaster Financial Assistance program following the June flooding.

Through the Flood Protection Program, the province, federal government and local communities have invested $173 million for flood mitigation projects in B.C. since 2007.