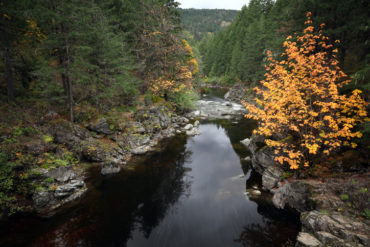 Issued at noon on Thursday, the advisory includes South Peace region and surrounding areas, including Pine Pass and tributaries around Tumbler Ridge, Chetwynd and MacKenzie, as well as the Skeena River and tributaries, including the Bulkley River. A high streamflow advisory means that river levels are rising or expected to rise rapidly, but that no major flooding is expected, RFC explained in a statement. Minor flooding in low-lying areas is possible.

According to the statement, a Pacific frontal system is expected to sweep across the province on Thursday, reaching the northern B.C. Interior at night. Heavy rain is expected across the region overnight Thursday and into Friday. Environment Canada has issued a special weather statement for the region and rainfall in excess of 50 millimetres is possible over the next 48 hours, RFC reported in the statement, adding that there is “still some uncertainty over how the system will pass and which locations will receive the highest amount of precipitation.”

Peak river flows are expected on Friday and Saturday, when there is a potential for flooding.

On Wednesday, the Canadian Press reported that although “record volumes of water have rushed into rivers and lakes throughout British Columbia’s Interior this spring,” flooding fears are beginning to ease.

A spokesperson for the RFC said that the inflow to Okanagan Lake in May was about “240 per cent of normal, and about 10 per cent higher than any other year the agency has records for.” Canadian Press reported that the high water levels, caused by a combination of rain and warm temperatures melting snow at high elevations, forced hundreds of people from their homes and destroyed docks and other property along waterfronts.