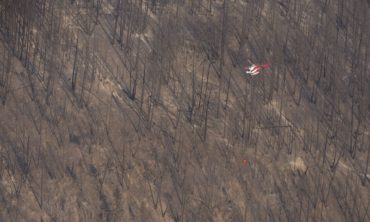 A helicopter carries a water bucket over a burnt out area of the Philpot Road wildfire just outside of Kelowna, B.C., on Monday, August 28, 2017. THE CANADIAN PRESS/Jonathan Hayward

Maya Lange with Destination BC, the province’s tourism planning and marketing corporation, said Wednesday preliminary results from a survey of businesses in the Kootenay-Rockies region found that 32 per cent are anticipating losses due to perceptions of the fires.

“We are very concerned. Just looking at the volume of visitation and the volume of trips that are taken by British Columbian and Albertan residents alone … especially in the months of July and August, we think there will be a significant impact.”

She said one business in the region alone reported it has lost $100,000 due to cancellations in July.

The Thompson-Okanagan region has been hardest hit by wildfires and Lange said 47 per cent of businesses in the area are reporting some sort of interruption this summer, such as cancellations or road closures.

Barkerville Historic Town and Park, a provincially operated attraction, has also reported a 54 per cent decline in visits comparing July 7 to Aug. 21 this year to last year, which caused a 50 per cent drop in net revenue.

“If Barkerville is down, the surrounding privately owned businesses that provide accommodations, hospitality, food and other activities will also be down and those impacts will be much harder on those private entities,” Lange said.

Businesses are encouraged to contact their customers and reassure them it is still safe to travel in an effort to avoid cancellations. Lange said businesses are also being told to share photos of their sites on social media so people can see the region is safe and accessible.

Lange said Destinations BC has a marketing campaign underway to better inform travellers that most of the province remains safe to explore but it’s expected that losses to the industry will be significant once the total numbers for the season are calculated.

The BC Wildfire Service said there have been 1,154 fires sparked since April 1 burning more than 10,600 square kilometres of land, and there is no sign of fire activity slowing down soon.

An evacuation order for an area south of Highway 24, including properties around Watch Lake, Horse Lake and Little Green Lake, was expanded as a result of the blaze.

A wildfire burning south of the border in Washington state has also moved into B.C. toward the community of Newgate, which is about 90 kilometres southeast of Cranbrook.

The fire was about 650 hectares in size on the U.S. side of the border and had spread to about 30 hectares in B.C. on Wednesday. Turcot said the wildfire service was working with its U.S. counterpart to fight the blaze and helicopters from both countries were waterbombing hotspots.

Turcot said there is no rain in the forecast for the central and southern Interior over the next week to bring relief from hot and dry conditions expected this weekend, which poses a greater fire risk.

– By Linda Givetash in Vancouver