PRINCE GEORGE, B.C. – British Columbia’s wildfire service says precipitation and favourable weather have allowed it to contain one of the province’s largest active wildfires, more than a month after it was initially discovered.

After growing to more than 900 square kilometres, the fire burning near Shovel Lake in northwestern B.C. was hit with scattered showers overnight, and Claire Allen of the BC Wildfire Service said any further growth is unlikely.

“We’re not under control yet, seeing as there is still a lot of internal activity and a lot of work for crews to do over the next few weeks here,” Allen said Sunday. 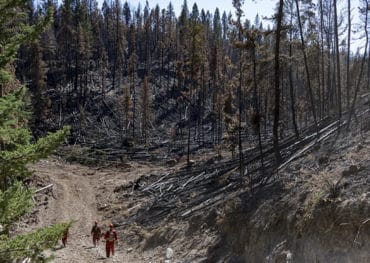 The nights in the northwest part of B.C. are becoming quite cool and dropping to near-freezing levels, which Allen said reduces their burning window considerably, though the turn of seasons does not necessarily mean the end of the wildfire season.

“The winds do tend to pick up in the fall so that’s something we’re watching quite closely,” she added.

Apart from potential gusts, Sunday’s forecast in the area was favourable, with highs in the mid to upper teens and plenty of moisture in the air with a humidity index of nearly 40 per cent.

This comes after winds gusting up to 60 kilometres per hour hit the blaze on Friday, which did not push the fire past the established containment lines.

Allen said as the season ends, the importance of establishing containment lines ahead of a fire front is considerably lessened, and firefighters can change their tactics to match the lowered fire activity.

“Fire behaviour generally becomes reduced this time of year, so our crews are able to do a bit more direct attack,” she said from the fire centre in Prince George, B.C.

Allen said they have not seen as much torching in the area, where trees burn from the bottom up and resemble a torch, but noted that as autumn nears, deciduous trees will shed their leaves and create a different problem.

She said deciduous leaves tend to hold more moisture in the summer and can act as natural barrier for ground fires, but as the leaves dry and tumble from their branches, they can act as fuel for smouldering ground fires.

“We’ll be watching that in case it kicks up additional surface ground fires and have crews respond to that,” she said, adding she expected firefighters would have another few weeks left before that could become a problem.

On Sunday, an alert issued for 872 properties by the district of Fort St. James, a municipality due northeast of the wildfire, was fully rescinded.

Allen said there is no longer a threat to any structures near the Shovel Lake wildfire and Fort St. James, and that while the wildfire service could confirm the blaze was man-made, the exact cause of the fire was still under investigation by the Prince George Fire Centre.

An area restriction for public safety will remain in place for the wildfire near Shovel Lake until at least noon on Sept. 15.