Ontario flooding a “wakeup call” for homeowners to check their policies: IBC

Ongoing flooding issues in southern Ontario are a “wakeup call” that homeowners should be reviewing their water damage coverage, Insurance Bureau of Canada (IBC) cautions.

Several communities, including Brantford, Chatham and London, experienced flooding due to mild temperatures and several days of heavy rain last week. Catastrophe Indices and Quantification Inc. (CatIQ) does not expect insured loss figures to be available for about another three weeks but does expect insured losses to exceed $25 million. 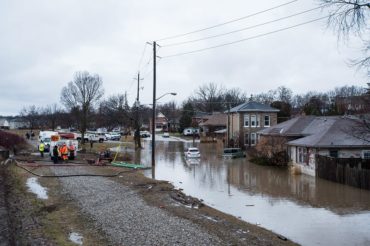 An ice jam on southwestern Ontario’s Grand River forced nearly 5,000 people from their homes in Brantford, The Canadian Press reported.

“It’s a wakeup call for people to review their policies, review their coverages and make sure they are properly protected,” Pete Karageorgos, IBC’s director of consumer and industry relations for Ontario, told Canadian Underwriter. Karageorgos said he visited Brantford this past weekend and spoke with several residents, one of whom was “shocked by the amount of ice backup, and that the river rose so quickly.”

Homes adjacent to the river were flooded, but water also appeared in the basements of homes that were not beside the river. “In some cases, it was a question of how the water ended up penetrating the basement?” said Karageorgos, adding it was unclear whether the water came up from the sewer or whether the flooded basements were caused by a high water table. For those homeowners, the “big questions” are the cause, and whether or not the water damage is covered under their homeowner policies, he added.

“Like any case with respect to insurance, each of those claims will be handled on their own merits and investigated based on what the adjuster is going to look to see how did the damage happen,” Karageorgos said.

Sewer backup is available as an option from most home insurers, but coverage for overland flood was generally not available to Canadian homeowners until 2015.

About 8% to 10% of Canadian homeowners are in areas where flood coverage is not available or where the premium “would be outrageous,” Robert Harrison, chairman of the Insurance Brokers Association of Canada, told Canadian Underwriter earlier.

The disaster in Ontario last week provides “an opportunity for people to sit down with their insurance representatives and look at their coverage and say, ‘Okay, can I get coverage? What coverage do I need going forward?’” said Karageorgos.

For Brantford homeowners whose properties were “immediately abutting or adjacent to the river … the question is, could they get insurance?” Karageorgos said. “In some cases, people were perhaps aware of the fact that their insurance provider was not offering [overland flood] coverage because of how close they were to the river.”