VANCOUVER – A blanket of heavy, wet snow cut off power to thousands in British Columbia and caused commuter chaos in Metro Vancouver on Monday. 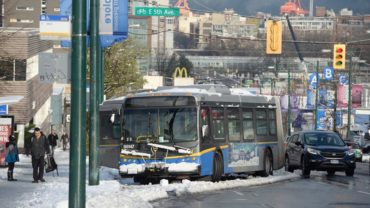 A jack-knifed bus blocks a lane in Vancouver, Monday, Dec.19, 2016. An early morning snowfall paralyzed the commute around Greater Vancouver on Monday. THE CANADIAN PRESS/Jonathan Hayward

The snowfall caused trees or branches to come down over power lines and at its peak, about 18,000 people were without power, most of them on the Lower Mainland and the Sunshine Coast.

Snow also caused a tree to topple over rail lines, stopping passengers on the West Coast Express from coming into the city.

Commuters trying to move around southern B.C. had to deal with heavy slush and icy conditions that caused numerous traffic accidents and long traffic delays.

Related: Crews in B.C. preparing bridges for safety in anticipation of second snowfall

The snow falling on Sunday had been forecast to shift to rain overnight, instead five centimetres of heavy snow covered much of southwestern B.C.

Weather warnings have been lifted for most of the province, but snowfall warnings remain up for the north, west and east Columbia regions, Shuswap and Kinbasket.