ABBOTSFORD, B.C. – Snowfall records across southern British Columbia are falling as a winter storm continues to wallop the region. 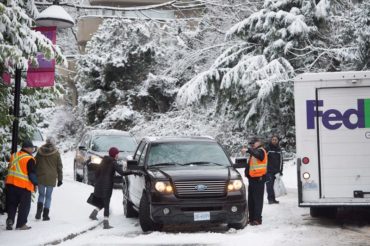 The white stuff has been flying since Friday, prompting Environment Canada to issue snowfall warnings for many areas along the south coast and the southern interior of the province.

The agency said another five to 10 centimetres of snow was expected to fall in the Fraser Valley Sunday, while up to 15 centimetres was forecast for Metro Vancouver.

It’s been an unusually cold and white winter across the region, and the latest storm has shattered historic snowfall records, said Environment Canada meteorologist Jennifer Hay.

A new high was set at Vancouver’s airport Friday, when 12 centimetres fell, beating the record of 10.7 centimetres set in 1946.

The City of Abbotsford said in a tweet that 38 centimetres of snow fell in the Fraser Valley community between Friday and Sunday morning, rivalling the 46 centimetres that fell in all of December.

Schools in both Abbotsford and Mission will be closed Monday due to the weather, the school boards said in separate statements on Sunday.

Wintry weather also cancelled a half marathon planned for Vancouver Sunday, when organizers found the route around the seawall that winds around Stanley Park was not safe.

City crews in municipalities throughout the Lower Mainland were busy putting salt down along major roadways over the weekend, attempting to stop falling snowflakes from becoming sheets of ice.

38cm of snow by 4pm Sat in Abbotsford @GlobalBC pic.twitter.com/tqW7bVul5L

In Abbotsford, crews have been on the roads around the clock clearing the roads, said Peter Sparanese, the city’s general manager of engineering and regional utilities.

“It’s not uncommon for us to receive snow in the valley and we’ve been prepared for this event,” he said. “We’ve been working really hard and diligently to get our roads open for the community.”

Still, roads across the region have been treacherous since the latest winter storm began.

The Insurance Corporation of B.C. had 5,074 calls to its Dial a Claim line on Friday, nearly double the 2,800 calls it receives on an average workday, said spokesman Sam Corea. On Saturday, the line got 2,388 calls, up from the 1,500 calls on an average Saturday.

“We are busier than normal,” Corea said. “It is still winter so we encourage drivers to slow down and drive for the conditions.”

The glacial melt along Broadway is displacing some of the larger boulders. #Vancouver #Vancouversnow pic.twitter.com/SDtyiNuSy7

It's still snowing out there!If you're driving, pls remember to take your time& to clear your car of all the snow for your safety & others! pic.twitter.com/GyVF3IrvpE

No snow falling in downtown Vancouver this morning, but check out the scene in Abbotsford half an hour ago (Photo by @JulieNolinCTV) pic.twitter.com/23FLfmsQlI