Oil and gas company BP plc announced on Thursday that the 2010 Deepwater Horizon accident and oil spill will cause the company to take “an after-tax non-operating charge of around US$2.5 billion in its second quarter 2016 results.” 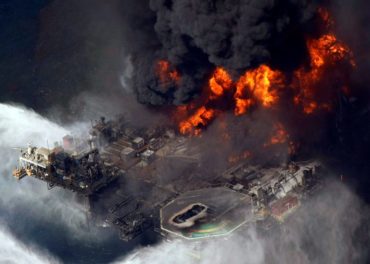 FILE – In this April 21, 2010, file photo, the Deepwater Horizon oil rig burns in the Gulf of Mexico, more than 50 miles southeast of Venice, La. More than two years after the Gulf of Mexico oil spill in 2010, BP agreed to plead guilty to several charges, including lying to Congress about how much oil was spewing from the blown-out well. (AP Photo/Gerald Herbert, File)

BP said in a statement that following “significant progress” in resolving outstanding claims resulting from the 2010 incident, “it can now reliably estimate all of its remaining material liabilities in connection with the incident.”

The US$2.5 billion charge is expected to include a pre-tax non-operating charge associated with the oil spill of around US$5.2 billion, bringing the total cumulative pre-tax operating charge related to the incident to US$61.6 billion, or US$44 billion after tax. “BP believes that any further outstanding Deepwater Horizon-related claims not covered by this additional charge will not have a material impact on the Group’s financial performance,” the statement said, adding that company will deal with remaining claims in the “ordinary course of business.”

“Over the past few months we’ve made significant progress resolving outstanding Deepwater Horizon claims and today we can estimate all the material liabilities remaining from the incident,” Brian Gilvary, BP’s chief financial officer, said in the statement. “Importantly, we have a clear plan for managing these costs and it provides our investors with certainty going forward.”

Gilvary reconfirmed that BP expects to continue to use proceeds of divestments to meet Deepwater Horizon commitments in line with the financial framework laid out in previous quarters. A year ago, BP reached agreements to settle outstanding federal, state and local government claims arising from the event. In the months since, BP has made further progress in resolving outstanding claims arising from the incident.

A court and the Deepwater Horizon Court Supervised Settlement Program have been progressing through the remaining economic and property damage claims relating to the 2012 Plantiffs’ Steering Committee (PCS) settlement, including through simplified and accelerated procedures for processing certain claims. The US$2.5 billion charge includes the estimated cost of settling all outstanding business and economic loss claims under that settlement, which are expected to be paid by 2019.

“There has also been significant progress in resolving economic loss and property damage claims from individuals and businesses that either opted out of the PSC settlement and/or were excluded from that settlement,” the statement said. In February 2016, the United States federal district court estimated that there were more than 85,000 valid opt-out and excluded economic loss plaintiffs, but the “vast majority of these claims have since been settled or dismissed as an order of the court.”

An estimate of the cost of the remaining claims, expected to be paid by the end of 2016, is also included in this announced charge, as is a US$175 million settlement of claims from a class of post-explosion “ADS purchasers in the MDL 2185 securities litigation,” payable during 2016-2017.