Business interruption payouts should be based on historic results even in post-disaster economy: AEIC speaker

The Fort McMurray wildfire will likely raise questions about the basis for business interruption (BI) insurance payouts in a post-catastrophe economy, but historic results are the best indication of what otherwise would have occurred, Emily Stock argued during the 43rd Annual Engineering Insurance Conference (AEIC).

“My conclusion and my analysis leads me to believe that the application of the principles of Canadian insurance will result in a fair interpretation of the policy,” said Stock, an insurance litigation lawyer with Stieber Berlach LLP, who practices primarily in insurance law, construction and general liability.

“The best approach supported by the Canadian law is that the post-catastrophe sales and expenses should be ignored and the loss valued on the basis of the historic results is the best indication of what otherwise would have occurred,” she told attendees of AEIC, presented by the Canadian Boiler and Machinery Underwriters Association and held in downtown Toronto late last week.

“How should BI valuation clauses be interpreted when a catastrophic event has impacted the business’ surrounding economy?” Stock queried. Should the post- catastrophe business economy be considered with regard to BI insurance?

The way that BI insurance is drafted “doesn’t contemplate a scenario where the entire economy is affected by the peril or the disaster that has caused the loss,” said Stock.

“When you actually look at the language, you realize that it’s very vague or ambiguous as to whether or not you should focus just on the historic situation with the business or whether you focus on what probably would have happened, but for this disaster,” she noted.

“On a common fire peril, a building over there burns down, it doesn’t frankly make a difference, because all of your neighbours are still in business next to you,” Stock explained. “What makes it unique about Cat coverage is that the entire economy has probably been changed by the peril.”

Since there has not been any case in Canada considering this issue, the courts may look south of the border to provide some insight. But the case law following Hurricane Katrina, for example, offers no consistent interpretation.

Some courts based BI payouts on the pre-loss revenue and others on post-Cat better rates, Stock noted. Looking at the U.S. cases, there is no way to “distinguish them and say they come down to the same principles,” she said.

The courts considering those cases “is going to have to say that throughout the United States, the case law is all over the map and we need to find a Canadian approach that is fair and reflects the Canadian values,” Stock (pictured below) told attendees. 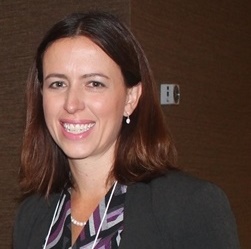 “There are going to be arguments and there are going to be cases coming out of Fort McMurray addressing this issue where they’re going to argue that based on the language of the policy, they should be entitled to both the better rates after Katrina, in addition to the fact that they actually made the money and got to reopen as well and had other benefits,” she suggested.

Stock laid out a scenario in which a hotel in Fort McMurray, which had occupancy of 40% or 50% before the fire, had 100% occupancy since the fire. Contrast that to a high-end restaurant that is not doing well in a post-disaster economy because the regular clientele have not returned and other potential customers are opting not to spend “on the frills of life.”

“If you were to analyze their business interruption applicability or coverage based on the post-disaster, you’d say, ‘Well, you were going to go out of business anyway,” she said. “Why would I, the insurance company, give you the benefit of the doubt and pay based on historical results?”

A court considering BI is not going to be able to make “a blanket statement that the policyholder would expect coverage because they would expect that business interruption insurance would mean something,” Stock told attendees.

“What makes the post-catastrophe economy situation interesting is the fact that the effects are different for the different policyholders, so a court considering this is going to have to consider both the hotel in Fort McMurray as well as the restaurant down the street.”

“Within Canadian history, there have not been that many catastrophes that have affected surrounding economies, but we are seeing it more and more,” she said.

“At a very small level, these types of coverage questions came out of the 2013 floods in Alberta and there’s also been some that have come out of fishing and other things out of the eastern province where it has affected the post-disaster economy,” she told attendees.

“But we haven’t seen any until Fort McMurray that have the type of numbers attached to it that make it a real question for the Canadian insurance industry,” Stock said.

“My recommendation and expectation is that we will read out these, that clause and that language, in a situation where it would be unfair to some of the other policyholders,” she added.