Businesses plan to “invest in resilience” in aftermath of Hurricane Matthew: FM Global

The ravages of Hurricane Matthew are prompting businesses to rethink their natural hazards preparedness, with more than one out of four surveyed employees in the stricken region saying they believe their companies will increase investment in the area. 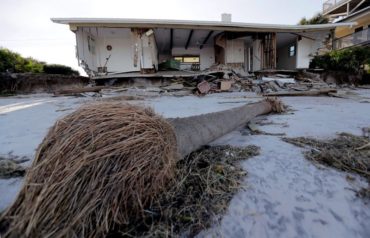 The survey, focusing on the hurricane’s business impact was released on Friday by FM Global, one of the world’s largest commercial and industrial property insurers. It found that 28% of employees from Florida, Georgia and the Carolinas said that they believe their employer is increasing investment in preparedness for natural disasters like hurricanes, as a result of Hurricane Matthew.

The online survey of 1,224 employees (315 in Florida, 303 in Georgia, 304 in North Carolina and 302 in South Carolina), from companies of all sizes, was sponsored by FM Global and administered in mid-October 2016 by research firm Qualtrics.

According to FM Global, Hurricane Matthew was the costliest Atlantic hurricane since Superstorm Sandy, which struck the east coast of the United States almost exactly four years ago. Catastrophe risk modelling company Risk Management Solutions, Inc. estimated on Oct. 21 that the hurricane will produce insured losses of US$1.5 billion to US$5 billion for the U.S. and US$1 billion to US$3 billion in the Caribbean. Other estimates ranged between US$2.8 billion and US$8.8 billion.

FM Global’s said in a statement that while respondents gave their companies mostly “A’s and B’s” for pre-storm preparedness, nearly two out of five employees (38%) said Hurricane Matthew interrupted normal business operations, and 26% of employees said their companies lost customers or orders as a result of the storm.

“Hurricane Matthew was a catastrophic event of major proportions, and disruptions of all kinds were to be expected,” said Brion Callori, senior vice president of engineering and research at FM Global, in the statement. “However, we do believe the majority of loss is preventable, and tools and solutions exist to both understand what might occur during a hurricane and be prepared to mitigate the effects. We applaud new investment in resilience since it could make all the difference in the fate of a business, including revenue, market share, shareholder value and reputation. It’s only a matter of time before the next severe storm strikes.”

Established nearly two centuries ago, FM Global is a mutual insurance company whose capital, scientific research capability and engineering expertise are solely dedicated to property risk management and the resilience of its client-owners.