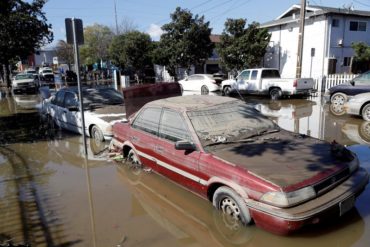 Cars are partially submerged and covered in mud from receding floodwaters Thursday, Feb. 23, 2017, in San Jose, Calif. Thousands of people evacuated from a flood in San Jose, California, returned home Thursday amid warnings to be careful about hygiene and handling food that may have come into contact with flood water. (AP Photo/Marcio Jose Sanchez)

Brown said Friday he would do that by redirecting $50 million from the state general fund and requesting a $387 million appropriation from the voter-approved 2014 Proposition 1 water bond.

Both actions require approval by the state Legislature, and Brown is asking that it be done as soon as possible.

Anderson Reservoir which produced #CoyoteCreek #SanJose #flooding has dropped 2% from 106% full to 104%. Below flood stage by Thursday. pic.twitter.com/Fip1hotzpN