Insurers have no “meaningful way of modelling wildfire” losses, a senior executive for Swiss Re Ltd. recently suggested to industry professionals. 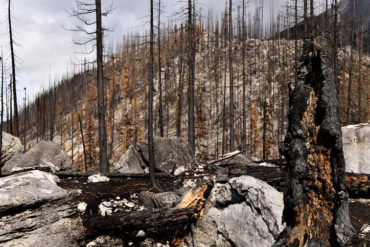 “If you look at it globally speaking, usually about half of the total insured losses globally are unmodelled perils,” said Balz Grollimund, Swiss Reinsurance Company Ltd.’s head of treaty underwriting for Canada and English Caribbean.

Grollimund made his comment during a panel discussion, titled Natural Catastrophes and Climate Change Implications, on April 25 at Insurance Bureau of Canada’s Financial Affairs Symposium.

“Even in today’s world that is starting to be affected by climate change, there is a lot we haven’t really started to acknowledge, as risk managers in a proper way,” Grollimund said at the symposium, held in downtown Toronto at the Design Exchange. “Take for example wildfire. We don’t really have any meaningful way of modelling wildfire today, globally speaking.”

Grollimund  made that comment in reply to a question from Ernst & Young LLP partner Steve Lee, who was moderating the discussion. Lee had asked the panelists how they expect climate change to affect the Canadian economy.

The May, 2016 wildfire that resulted in the evacuation of Fort McMurray was “the largest insured catastrophic claim event in Canadian history,” wrote Stewart McIlwraith, senior vice president and head of insurance for DBRS Ltd., in MSA Research Inc.’s Quarterly Outlook Report, released April 18.

In its Sigma report released March 28, Swiss Re estimated the “overall financial impact” of the wildfire “could be as high as” $9.5 billion, including lost work hours.

“There is not a rigorous way of modeling wildfire risk like we do for earthquakes or for storms,” Grollimund said April 25 at Financial Affairs Symposium.

“The unmodelled perils that we have seen have had significant economic and insured loss impact over recent years,” said Moini.  “If you rewind the clock to 2013 there were no commercially available flood models for Canada. There are now but there are also no commercially widely available wildfire models.”

Before 2013, the most expensive natural disaster in Canadian history, measured by insured losses, was the ice storm that affected Eastern Canada in 1998. That changed in June, 2013, when southern Alberta was affected by floods that resulted in the evacuation of the entire town of High River and the inundation of downtown Calgary. On July 8 of that year, two separate thunderstorms hit the west side of the Toronto area, resulting in more rainfall in one day than Toronto normally gets during the entire month of July. That storm stranded GO Train commuters for hours after a railroad in the Don River valley was flooded and left thousands without power after a below-grade transformer station was flooded. The Alberta flood and Greater Toronto Area storm took the Number 1 and 3 spots respectively, on the list of costliest natural disaster, until the Fort McMurray wildfire of May, 2016.

“Flood was one that was not really modelled until the 2013 Calgary and (greater Toronto area) floods and these events triggered a more rigorous look at it,” Grollimund said April 25 at the Financial Affairs Symposium.  “The period of the events triggers the modelling industry to pick up but there’s still a pretty big gap quantitatively just in modelling the physical world today.”

Industry loss data from the 2016 Alberta wildfire “came in at around $3.7 billion” excluding loss adjustment expenses, McIlwraith wrote in the MSA Quarterly Outlook Report. He was quoting both from DBRS and Catastrophe Indices and Quantification Inc. (CatIQ), a sister company to MSA Research.

Wildfire was the topic of discussion Feb. 2 at one session at the CatIQ Canadian Catastrophe Conference (C4), held at Toronto’s Allstream Centre.

Despite the 2016 Fort McMurray wildfire and the 2011 Slave Lake wildfire, “the Canadian insurance industry never really concerned themselves with wildfire,” Glenn McGillivray, managing director of the Institute for Catastrophic Loss Reduction said during C4.

At the time, McGillivray was moderating a panel discussion titled Wildfire Risk Management. One of his panelists was Andreas Siebert, head of geospatial solutions for Munich Re.

“We have a lot of experience with wildfire in California and Australia,” Siebert said Feb. 2 at CatIQ’s Canadian Catastrophe Conference. “We have no model for Canada, which is strange and wildfire on a global scale has always been a poor cousin in the modeling community due to the amount of affected values.”

Models for earthquake, wind, hurricane and winter storm are “fairly robust as far as the latest science is concerned,” Moini said April 25 at the Financial Affairs Symposium. “I think where the opportunities are is extending the commercially available models so that the users of them can do scenario stress testing of climate change scenarios under their portfolio.”