Canadian couple among the dead in Tennessee wildfire

GATLINBURG, Tenn. – A couple from Canada is among the victims of a wildfire that ravaged the Smoky Mountains resort city of Gatlinburg, Tennessee.

Authorities say 71-year-old Jon Tegler and 70-year-old Janet Tegler are among 13 people who have died as a result of the fires.

The dead also included a Memphis couple who was separated from their three sons. The three young men learned their parents had died as they were recovering in hospital. 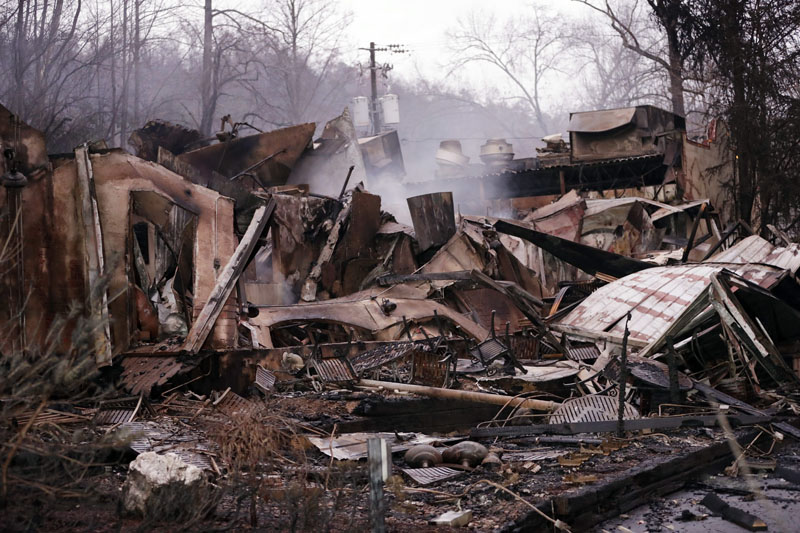 The remains of a business Wednesday, Nov. 30, 2016, after a wildfire hit Gatlinburg, Tennessee. Photo by Mark Humphrey, The Associated Press

Other fatalities included a woman who was vacationing in Gatlinburg and died of a heart attack after she was exposed to smoke. Identities for the other victims have not been released.

The trouble began Monday when a wildfire, likely caused by a person, spread from the Great Smoky Mountains National Park into the Gatlinburg area as hurricane-force winds toppled trees and power lines, blowing embers in all directions.

Gatlinburg’s fire chief said more than 20 structures caught fire in a matter of minutes, starting a blaze which grew rapidly.

More than 14,000 residents and visitors in Gatlinburg were forced to evacuate, and the typically bustling tourist city has been shuttered ever since.

Local officials bowing to pressure from frustrated property owners said they would allow people back into most parts of the city Friday morning, with residents having to go through a check point showing proof of ownership or residency.

Officials hope to open the city’s main roads to the public by Wednesday.

“I can’t describe to you the feelings we have over this tragedy,” he said during a news conference with the governor and U.S. senators.

Great Smoky Mountains National Park Superintendent Cassius Cash has said the fires were “likely to be human-caused” but has refused to elaborate, saying only that the investigation continues. Agents from the Bureau of Alcohol, Tobacco, Firearms and Explosives are helping investigate the cause.

About 10,000 acres burned inside the country’s most visited national park. Another 6,000 acres were scorched outside of the park.