The devastating wildfire in and around Fort McMurray – an event that has been estimated could produce insured losses of as much as $9 billion, becoming the most cost disaster event ever in Canada – clearly illustrates the pressing need to work toward fire resilience. 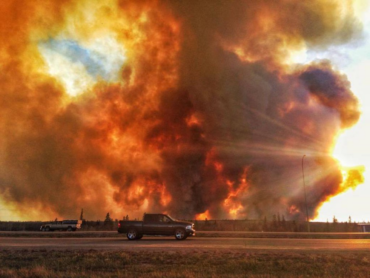 “The catastrophic wildfire around Fort McMurray reminds us of the need for continued perseverance of Canadian communities in working towards fire resilience by becoming FireSmart,” Kelly Johnston, executive director of Partners in Protection, says in a statement issued on Friday by the Co-operators Group Limited.

Johnston reports that more communities are taking up the challenge to become FireSmart and are taking part in the second annual National Wildfire Community Preparedness Day in Canada May 7. The event is an initiative of Partners in Protection/FireSmart Canada in collaboration with the National Fire Protection Association (NFPA), the Institute for Catastrophic Loss Reduction (ICLR) and The Co-operators.

Hundreds of millions of dollars are spent annually on suppressing wildfires, notes The Co-operators statement, which adds “changing climates and development trends are making the problem worse.”

The Fort McMurray “fire began in a mobile home park and spread rapidly, thanks to unseasonably high temperatures, low humidity and strong winds,” catastrophe modelling firm AIR Worldwide reported in a statement Thursday. As of that time, 1,600-plus structures in the isolated city amid boreal forest had been destroyed.

“AIR anticipates that losses arising from this fire will likely far exceed those arising from the Slave Lake wildfire in 2011 that destroyed 522 homes and structures,” the statement notes.

Insurance Bureau of Canada (IBC) reports that insured damage from Slave Lake amounted to more than $700 million. The “devastation is exceeded only by the more than $1.8 billion (figure adjusted for inflation) ice storm that hit Quebec and Ontario in 1998, and the $3.2 billion in insured damage for the 2013 Alberta floods,” notes information posted on IBC’s website.

Elevated neighbourhoods with areas of woodland place much of the community in a Wildland Urban Interface and at high risk from wildfire, AIR Worldwide notes.

Satellite image at 2200 UTC – you can really see the hot spots to the SE as well as around #FortMcMurray pic.twitter.com/3qc1wIFQbR

“With very few exceptions, catastrophic wildfires occur when three conditions are met simultaneously: dry heat maximizes the volatility of vegetation; extreme winds, which can drive the propagation of a fire through that vegetation, occur; and a fire ignites close to a moderately or heavily populated area,” explains Tomas Girnius, principal scientist at AIR Worldwide.

“All three conditions obtained in the vicinity of Fort McMurray,” Girnius points out in a statement, adding that the wildfire in Fort McMurray – which sits at a lower elevation than most other parts of Alberta and can be a hot spot – “has been very much aggravated by such strong and erratic winds.”

In a statement Thursday, Impact Forecasting notes the “atmospheric set-up that allowed these conditions to occur was largely attributed to what is known in the meteorological community as an ‘omega block’ given a wavy jet stream pattern that is shaped like the Greek letter Omega.”

When such a pattern emerges, it explains, it is defined by a stalled ridge of high pressure that acts as a block between advancing storm systems. This prohibits the normally expected west-to-east progression of areas of low pressure.

“As the omega block developed on May 2 and May 3, it allowed substantially warmer-than-normal air to track far northward into northern Alberta,” Impact Forecasting points out. The rapid spread of the fires was also aided by an abundance of boreal forest (such as spruce trees and pine trees) that is very conducive to burning, the company adds.

Thoughts are with all those affected by the fires – Fort McMurray, #Alberta pic.twitter.com/3Rav8m3Yn5

With the area closed and the fire still far from under control, AIR Worldwide suggests “it is too soon to have an accurate picture of the destruction, but it is clear that there has been a massive loss of property.” As of Thursday, the latest official estimates indicated “70% of the houses in the Beacon Hill neighborhood have been lost, in Abasand, 50% have been destroyed, Waterways has lost 90%, and Wood Buffalo has lost 30 homes,” the company adds.

AIR Worldwide further notes that because of the oil industry, “housing in the area is more expensive than its remoteness would suggest; in 2006 Fort McMurray had the highest real estate prices in Alberta.”

Related: An estimated 90% of homes in Fort McMurray, Alta. neighbourhood lost in wildfire

Impact Forecasting states that recent data from the Fort McMurray Real Estate Board indicates the cost of a single-family home was $627,150 compared to an average price of $300,000 in Slave Lake, as per the Slave Lake government.

Incredible/heartbreaking video of home going up in flames in #FortMacFire recorded on home security cam. https://t.co/l1BnNlE6rC

Like AIR Worldwide, Impact Forecasting, too, reports the ongoing nature of the event means it is too early to provide a specific economic or insured loss. “However, it is expected that once assessments are finalized, the Horse Creek Fire in Fort McMurray will end as one of the costliest natural disasters in Canada’s history,” the company predicts. The wildfire has prompted the largest evacuation in Alberta’s history, it adds, with 88,000 residents evacuated Tuesday and Wednesday.

Some of the projects carried out during the 2016 National Wildfire Community Preparedness Day seek to help protect properties. These projects include clearing brush, leaves and grass and other combustible material from around buildings, as well as raising awareness and educating Canadians about wildfire.

You've seen the devastation. Txt REDCROSS to 30333 to make a $5 donation to those affected by the fire #FortMacFire pic.twitter.com/MEJ4CfS34L

“Thirty projects, including one in the area currently affected by the (Fort McMurray) fire, received funding for local mitigation efforts to protect homes and communities from wildfire,” note the statement from The Co-operators.

“We are very pleased to see that a large number of communities take the threat of wildfire seriously and, thus, recognize the value in organizing a local National Wildfire Community Preparedness Day,” ICLR executive director Paul Kovacs says in the statement.

At its heart, the day is meant to bring together communities, homeowners and residents to “raise awareness of the hazards of wildfire and actions they can take to prevent the adverse impacts that wildfire can cause,” suggests Shayne Mintz, Canadian regional director of the NFPA. “The NFPA is strongly committed to supporting efforts such as this in Canada to reduce and hopefully eliminate the catastrophic losses that result annually from wildfire across Canada,” Mintz says.

Fire danger still at extreme for much of AB, SK & parts of BC and MB as a new high pressure builds in #hot #dry #ymm pic.twitter.com/Wn2hKLXTKC

“Wildfire can occur almost anywhere in Canada, and it’s encouraging to see projects being undertaken in so many parts of the country,” emphasizes Kathy Bardswick, president and CEO of The Co-operators.

Even projects that are modest in size potentially have a huge impact “in terms of the amount of damage they can prevent,” Bardswick points out.

"The fire is a monster with tentacles." @RCMPAlberta – the wind has made #FortMacFire unpredictable @CTVNews pic.twitter.com/u3rTLjM5cL

An intense wildfire can actually create it's own lightning storm. @JWagstaffe @CBCnews @CBCEdmontonhttps://t.co/9FU8QOCCRv