Why this city is billed as “progressive” in reducing flood risk

Toronto is one of the most progressive cities in taking steps to reduce basement flood risk, Institute for Catastrophic Loss Reduction (ICLR)  director of research Dan Sandink said Thursday in an interview. And a ban on below-grade garages is Exhibit A of one way the city has made strides.

Canadian Underwriter caught up with Sandink on the fifth anniversary of the most expensive natural disaster in Ontario’s history.

On July 8, 2013, Toronto International Airport got 126 millimetres of rain, nearly 70 per cent more than Toronto gets during the entire month of July. Two separate storm cells hit the western part of the Greater Toronto Area. Effects included the partial submersion of a full commuter train for several hours and about $1 billion in insured losses, mainly from sewer backup. 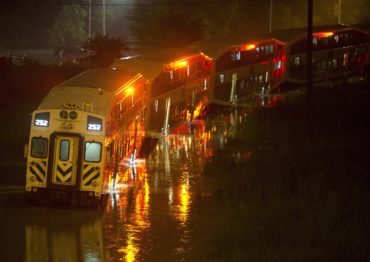 Since then, the City of Toronto has made good progress in basement flood protection, Sandink says. He cited as an example Toronto’s ban on construction (unless the resident gets an exemption) of below-grade garages for residential buildings.

Below grade garages with “reverse slope” driveways (which go downhill towards the building) “have been identified not only by Toronto but other cities throughout Ontario has risk factors for basement flooding,” Sandink said. “By and large they have very much discouraged the use of reverse slope driveways [in new construction].”

In 2006, the City of Toronto approved the Basement Flooding Protection Program, which includes construction of surface storage ponds and upgrades to storm and sanitary sewers. As part of that program, the city’s requires storm drainage systems to accommodate a one-in-100 year storm.

The Basement Flood Protection Program was brought in due to an August, 2005 rain storm, the effects of which included the collapse of the Finch Avenue bridge crossing Black Creek and more than $500 million in insured losses. After the 2005 storm, city staff  “targeted areas where there were significant complaints of flooding,” Sandink said Thursday.

Photo Credit: A GO commuter train is stranded in a Toronto flood July 8, 2013. Photo by Frank Gunn, THE CANADIAN PRESS