The City of Edmonton announced on Wednesday that it has released preliminary neighbourhood flood maps as part an ongoing flood mitigation assessment. 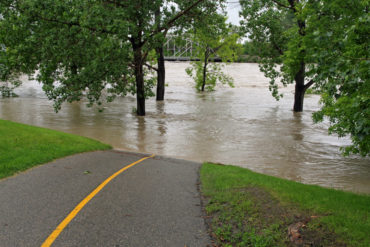 The city-wide assessment was initiated in response to floods in 2012 and future planning for changing weather patterns and rainstorms, the City of Edmonton said in a press release. The assessment looked at 160 mature neighbourhoods, primarily built before 1989, and within the Anthony Henday ring road. Thirty-three industrial parks will also be studied.

“The Edmonton of decades past had a much smaller population, with less demand on the system and experienced different, less severe rainstorms than we see today,” said Chris Ward, branch manager of utility services for the city, in the release. “City staff have started a proactive study of urban flood mitigation measures so that we can be better prepared in the years ahead.”

Background information from the city said that there are nine preliminary maps that cover four areas of the city; the fifth area is an industrial part of Edmonton “and will studied in the future.” The preliminary maps give viewers a sense of how pipes act during a storm and what impact the land and roads have on how water might collect in a neighbourhood. To complete the assessment, a large, four-hour rainstorm was modelled over each area shown in each of the nine maps. 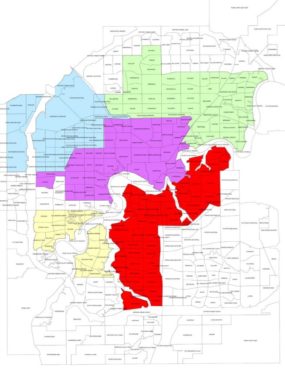 “This type of storm intensity over that large of an area is a worst-case scenario, but it provides the city with important information about how to manage and plan for those types of rainstorms and provide infrastructure solutions that are best suited to each area, if necessary,” the information said.

The maps show local area boundaries; flood records year (houses that reported some kind of basement flooding in previous rain events); surface ponding depths (depths of water that might pool on the ground during a large rainstorm); and surcharge depths (how full pipes get during a significant rain event).

The maps are part of a larger technical review and proposal for infrastructure enhancements that will come forward to city council for consideration, the city explained. It is anticipated that infrastructure upgrades will be required to ensure neighbourhoods can deal with the increasing needs placed on our existing drainage system.

City administration will balance risk, cost and the likelihood of major rainstorms when presenting alternatives to council in the second quarter of 2017. Coming forward will be a mitigation strategy with alternatives and cost estimates for consideration. Neighbourhood-specific recommendations and costs will be presented as appropriate strategies and programs are reviewed and developed. The city will continue to communicate to residents as program alternatives are developed and reviewed by council, the release said.