Normal to well-above normal soil moisture and winter precipitation to date, combined with future unfavourable weather conditions, will result in the risk of moderate to major overland flooding across the province of Manitoba, the provincial infrastructure minister said earlier this week. 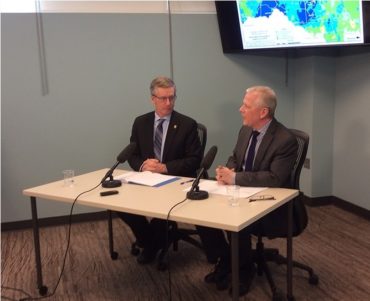 “We have experienced some unusual winter weather to this point that has contributed to an expanded risk of overland flooding in Manitoba,” Manitoba Infrastructure Minister Blaine Pedersen said in a press release. “At this time, we need to be aware of the potential for flooding with the understanding that we have a couple more months of winter weather and the uncertainty of the spring melt rate. The Manitoba Hydrologic Forecast Centre will continue to assess data over the coming weeks to refine future flood outlooks.”

On Jan. 30, Pedersen released the 2017 January Conditions Report due to the high soil moisture and winter precipitation to date, said the release from Manitoba Infrastructure, noting that the potential for overland flooding is estimated as moderate to major in most areas of the province. The report also noted this could change depending on weather conditions between now and the spring melt, with February and March flood outlooks further defining the flood potential.

The release noted that flood forecasters look at six primary factors when assessing long-term prospects for potential spring floods. In addition to soil moisture at freeze-up, other factors yet to be determined are: winter snow, spring rain, how fast the snow melts, the depth of frost and river and lake levels prior to spring run-off.

The first full flood outlook is expected at the end of February.