HALIFAX – The estimated cost for damage caused by the Thanksgiving Day floods in Cape Breton could exceed $15 million, says the Nova Scotia government. 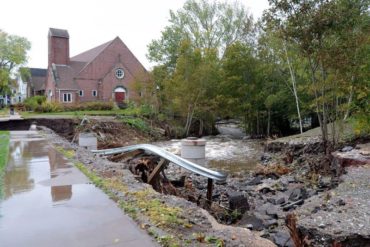 A washed out road and damaged guard rail is shown in Sydney, N.S., Tuesday, Oct.11, 2016. The estimated cost for damage caused by the Thanksgiving Day floods in Cape Breton could exceed $15 million, says the Nova Scotia government. THE CANADIAN PRESS/Vaughan Merchant

Zach Churchill, minister responsible for the Emergency Management Office, said Thursday the total could run even higher because the province is still waiting for more insurance information and final approval from the federal government.

The province later clarified in an email the figure included damage to municipal but not provincial infrastructure, and that it would take time to get a “firm number.”

Churchill said the province had also begun meeting with the 18 Sydney-area homeowners who were most affected by the flooding.

He said they will be given compensation to repair the damage, or the assessed pre-flood market value if they choose to move.

“This is specific to the 18 displaced homeowners,” said Churchill. “If there’s any questions related to the appraisal, the province is willing to fund a second appraisal if they are not comfortable with those numbers.”

The province said the homeowners would also be informed of the amount of money available to bring the homes to pre-flood condition and for the coverage of damage to the contents of their home. Test results for oil contamination would also be shared.

It further clarified that homes purchased by the province will be demolished and any contaminants will be remediated to appropriate environmental standards.

Financial support will also continue for homeowners displaced by flood damage until their claims are completed and they are resettled.

The province said to date it had received about 670 claims under its Disaster Financial Assistance program.