PORT ALBERNI, B.C. – Eleven families have been evacuated from the Tseshaht First Nation on Vancouver Island as the Somass River surges over its banks in low-lying areas west of Port Alberni, B.C. 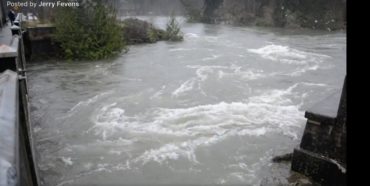 The state of emergency has not been lifted and the Somass River continued to rise on Wednesday morning. Photo: @alberniweather.

Rain warnings posted for the central Vancouver Island region were dropped late Tuesday, but Tseshaht emergency preparedness co-ordinator Hugh Braker says the state of emergency has not been lifted and the river continued to rise Wednesday morning.

He says it will take some time for swollen waterways to subside and Highway 4 is closed in both directions by flooding just west of Port Alberni, while several other sections are threatened along the only route to Tofino and Ucluelet.

The Tseshaht school is closed and a boil water advisory covers about half of the reserve, but Braker is optimistic that sandbagging of several threatened homes kept them dry Tuesday night.

He says the community is grateful for help from Vancouver Island residents and all that’s needed now is respite from the rain so water levels can fall.

The River Forecast Centre says a flood warning remains in effect for the Somass and its tributaries, a flood watch has been posted for the Salmon River near Sayward, north of Campbell River, and watches continue for many waterways of the central island.

“We are expecting quite a deluge of rain on Thursday night,” Braker says. “And there’s another, third storm coming in on Sunday and we are not quite sure what is going to happen with that one.”

The First Nation and the nearby city of Port Alberni were devastated by a flood in 2014, and Braker has said people are concerned this event could rival the previous disaster.