The U.S. Department of Justice (DOJ) and the Environmental Protection Agency (EPA) have announced a US$177 million settlement with Enbridge Energy Limited Partnership and several related Enbridge companies to resolve claims stemming from its 2010 oil spills in Marshall, Mich., and Romeoville, Ill. 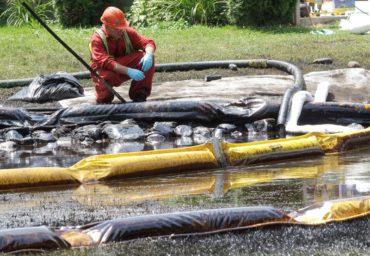 FILE – In this July 29, 2010, file photo, a worker monitors water in Talmadge Creek in Marshall Township, Mich., near the Kalamazoo River as oil from a ruptured pipeline, owned by Enbridge Inc., is attempted to be trapped by booms. On Monday, July 2, 2012, federal regulators proposed a $3.7 million civil penalty against the Canadian owner of the ruptured pipeline which dumped more than 800 million gallons of oil into the river. (AP Photo/Paul Sancya, File)

In addition, the proposed settlement will resolve Enbridge’s liability under the Oil Pollution Act, based on Enbridge’s commitment to pay over US$5.4 million in unreimbursed costs incurred by the government in connection with cleanup of the Marshall spill, as well as all future removal costs incurred by the government in connection with that spill. The settlement also includes an “extensive set” of specific requirements to prevent spills and enhance leak detection capabilities throughout Enbridge’s Lakehead pipeline system – a network of 14 pipelines spanning nearly 2,000 miles across seven states.

Enbridge must also take major actions to improve its spill preparedness and emergency response programs, the DOJ said in the release. Under the settlement, Enbridge is required to replace close to 300 miles of one of its pipelines, after obtaining all necessary approvals.

“This settlement will make the delivery of our nation’s energy resources safer and more environmentally responsible,” said Assistant Attorney General John C. Cruden for the Justice Department’s Environment and Natural Resources Division. “It requires Enbridge to take robust measures to improve the maintenance and monitoring of its Lakehead pipeline system, protecting lakes, rivers, land and communities across the upper Midwest, as well as pay a significant penalty.”

In addition to payments required under the proposed settlement, Enbridge has already reimbursed the government for US$57.8 million in cleanup costs from the Marshall spill and US$650,000 for cleanup costs from the Romeoville spill. “Enbridge reportedly incurred costs in excess of US$1 billion for required cleanup activities relating to the Marshall and Romeoville spills,” the release said.

Acting EPA Regional Administrator Robert Kaplan added that the Marshall spill was “one of the largest inland oil spills in U.S. history when Enbridge discharged one million gallons of oil to Talmadge Creek. It took 22 months of “arduous cleanup work” before the Kalamazoo River finally reopened for recreational activities.

Under the settlement, Enbridge is committing to the following measures, which it estimates will cost at least US$110 million:

The U.S. government’s complaint alleges that Enbridge owned or operated a 30 inch-pipeline, known as Line 6B, that ruptured near Marshall on July 25, 2010, discharging oil into the environment. Although the Line 6B rupture triggered numerous alarms in Enbridge’s control room, “Enbridge failed to recognize a pipeline had ruptured until at least 17 hours later.” In the meantime, Enbridge had restarted Line 6B on two separate occasions the following day, pumping additional oil into the ruptured pipeline and causing additional discharges of oil into the environment.

Ultimately, Line 6B discharged at least 20,082 barrels of crude oil, much of which entered Talmadge Creek and flowed into the Kalamazoo River. Flooding caused by heavy rains pushed the discharged oil over the river’s banks into its flood plains and accelerated its migration over 35 miles downstream before it was contained, the release said. Enbridge later replaced Line 6B, which originates in Griffith, Ind., crosses the lower peninsula of Michigan and ends in Sarnia, Ont., with a new, larger pipeline. “The rupture and discharges were caused by stress corrosion cracking on the pipeline, control room misinterpretations and other problems and pervasive organization failures at Enbridge,” the DOJ reported.

The complaint also alleges that on Sept. 9, 2010, another Enbridge pipeline, known as Line 6A, discharged at least 6,427 barrels of oil, much of which flowed through a drainage ditch into a retention pond in Romeoville.

Al Monaco, president and CEO of Enbridge said in a statement from Enbridge Energy Partners on Wednesday that “the learnings from our experience have made us a better company and the way we think about safety has changed. Over the past six years, we’ve intensified our focus on the safety and integrity of our systems enterprise-wide and we’ve invested significantly in our people, processes, equipment and technology.”

Following the Marshall spill, between 2010 and 2014, Enbridge and Enbridge Energy Partners “significantly enhanced efforts to better understand the condition of its pipelines and mitigate risks, while increasing staffing dedicated to preventative measures, maintaining system fitness and leak detection and pipeline control. Enterprise-wide, Enbridge executed a comprehensive maintenance and inspection program using the most sophisticated inspection tools available with a total investment of nearly $5 billion,” Monaco said.