Estimated insurable losses from Louisiana floods to range between US$8.5 billion and US$11 billion: AIR Worldwide

AIR Worldwide is estimating that “industry ground-up insurable losses” from the flooding in Louisiana during August will be between US$8.5 billion and US$11 billion. 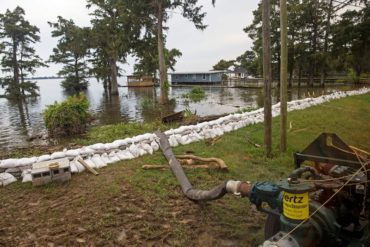 The catastrophe modelling firm explained in a press release issued on Monday that the “industry ground-up insurable losses” include exposures eligible for coverage – regardless of whether they are actually insured – without any application of deductibles or limits. The insurable loss estimates reflect insurable physical damage to property (residential, commercial), both structures and their contents, and auto; and direct business interruption losses.

“Extreme rainfall-induced flash flooding and river flooding on the floodplain have wreaked havoc in Louisiana, breaking records and damaging property throughout many parishes,” said Dr. Boyko Dodov, vice president and director of flood modeling at AIR Worldwide, in the release. “Beginning around Aug. 10, 2016, rainfall continued almost perpetually for approximately seven days, resulting in accumulations of around 7.1 trillion gallons in Baton Rouge and the surrounding suburbs, according to reports, reaching upwards of 30 inches in some areas.”

August 2016 is now the wettest month on record for Baton Rouge since 1907. A National Oceanic and Atmospheric Administration rapid-response study indicated that a rainfall event such as this is expected to occur at least 40% more often than it has in the country’s pre-industrial past, reported AIR Worldwide, a Verisk Analytics business.

Historic crests at 12 real-time river gauging stations of the U.S. Geological Survey were surpassed due to the rainfall event, including on the Amite, Comite, Tickfaw and Tangipahoa rivers, the AIR release said. A report from the Baton Rouge Area Chamber indicates more than 145,000 residences – housing upwards of 359,000 people – were in flood-affected areas; almost 12,000 businesses, which together employ more than 136,000 people, are in areas identified as flood-affected.

The majority of homeowners impacted by the floods reportedly did not have flood insurance because their homes were not in flood zones, the release said, “thus the financial burden of recovery is inhibiting progress; around 850 people are said to still be in shelters.”

AIR’s loss estimates explicitly capture residential, commercial and automobile losses from inland flood both on and off the floodplain based on 100 simulated event scenarios that reflect uncertainty in precipitation observations and modelled levee failures. These loss estimates were derived based on AIR’s high-resolution Industry Exposure Database (IED) for the United States and damage ratios estimated from reported flood inundation.

The range in AIR’s loss estimates also reflects uncertainty in the payment of additional living expenses resulting from relocation, time spent in secondary housing, lost wages, loss of electricity and damage to contents. Total economic losses are expected to be higher than industry insurable loss estimates. (In September, Aon Benfield estimated that the recent flooding in Louisiana would cost the U.S. economy between US$10 billion and US$15 billion).

Related: Climate change increased chances of record rains in Louisiana by at least 40%: NOAA and partners

AIR’s modelled hazard intensities reflect the maximum estimated river flows and maximum excess runoff intensities during the event from August 8 to 19. Given the duration of the event, AIR expects the flood to be treated as a single occurrence in Louisiana.

The loss estimates do not reflect: