Estimated insured losses for U.S., Caribbean from Hurricane Matthew US$2.5 billion to US$8 billion: RMS

RMS has estimated Hurricane Matthew will produce insured losses of US$1.5 billion to US$5 billion for the United States and US$1 billion to US$3 billion in the Caribbean, making it the reinsurance industry’s costliest Atlantic hurricane since Sandy four years ago.

Only one of 10 RMS event reconstructions generated a U.S. loss in excess of US$4 billion, notes a statement Friday from the catastrophe risk management firm.

“However, the company advises there is still a small possibility that losses could reach as high as US$5 billion,” RMS reports, adding estimates are based on reconstructing Matthew’s hazard from both remote and on-the-ground damage surveys. 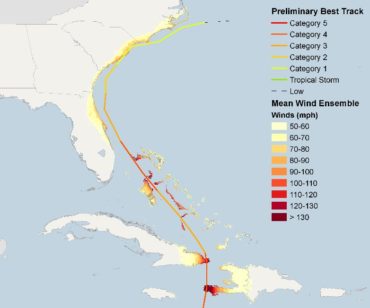 Hurricane Matthew caused significant damage and loss of life in Haiti, Cuba and the Bahamas before reaching the U.S. Beyond the effects at landfall, the storm followed a path just off the southeast U.S. coastline for two days, drenching much of coastline along its track with torrential rains.

Approximately 70% of the estimated U.S. loss – which does not include National Flood Insurance Program or public buildings and infrastructure losses – is to residential lines, RMS notes. Storm surge-driven coastal flooding is estimated to contribute approximately 30% of the all-lines loss.

The latter includes “coverage leakage and an escalation in claims severity for wind-only policies in situations where wind and water hazards co-exist in residential lines of business,” the statement explains.

Of the estimated Caribbean loss, RMS anticipates that the highest proportion will emanate from the Bahamas.

Loss estimates for both the U.S. and Caribbean from Hurricane Matthew include property damage and business interruption, caused by wind and coastal flooding upon residential, commercial and industrial lines of business. For the U.S, auto lines of business are also included.

For the U.S., surveys indicate “severe flooding, driven by storm surge and the record rainfalls will prove to be the largest driver of economic losses in the southeast U.S.,” the statement notes.

“However, at this time, the RMS loss estimate excludes damage associated with inland flooding, since a post-event estimation of the impact of inland flooding can only be completed once all inland flooding has concluded – and some rivers remain at flood level,” the company adds.

While RMS does not expect the private insurance industry to receive a high number of flood claims, it does anticipate “the insurance industry will cover inland flood losses incurred by commercial and industrial exposure, which tend to be covered as part of multi-peril or all risks policies.”

Noting a degree of uncertainty exists around loss estimates in the immediate aftermath of a hurricane, “Matthew’s track parallel to the southeast U.S. coast put significant amounts of exposure at risk from damaging winds and surge, which exacerbates this uncertainty,” says Tom Sabbatelli, product manager in the RMS hurricane modelling team.

“Even small variations in our 10 wind and storm surge reconstructions over the wide swaths of exposure can have a significant impact on the estimated loss,” Sabbatelli cautions.