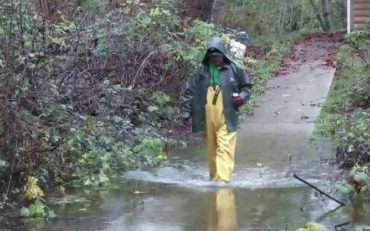 The Tsehaht First Nation on central Vancouver Island is operating under a state of emergency. Photo: @latestcanada.

Emergency Preparedness Co-ordinator Hugh Braker says residents have been warned to be ready to evacuate their homes.

He says highways crews are posting signs warning of flooding on Highway 4, just west of Port Alberni, as the water has reached the edge of the road.

Braker says travel along the Pacific Rim Highway, the only route to and from Tofino and Ucluelet, could be reduced to single-lane traffic.

Some #Volunteers all in good spirits making #sandbags at @Tseshaht First Nations. Your efforts are #Amazing #PortAlberni #AlberniValley pic.twitter.com/i9GBqjEgnk

The Tseshaht First Nation is operating under a state of emergency as it braces for conditions that could rival flooding that devastated the community and the nearby city of Port Alberni in 2014.

Environment Canada is calling for as much as 60 millimetres of rain over the region, while rain warnings remain posted for north and central Vancouver Island, and wind and rain warnings were in effect for its west coast.

Six families on the Tseshaht First Nation were forced to leave their homes on the weekend as a precaution but were able to return Monday.

Taking a look at the latest flood preparations in Port Alberni coming up tonight on @CTVNewsVI pic.twitter.com/2B2PafzfjE

In #PortAlberni tonight where a State of Emergency is in effect for the #Tseshaht reserve in anticipation of major flooding. @CHEK_News pic.twitter.com/Xm2ZZ7iBqH