SAN FRANCISCO – Evacuations were ordered in Northern California on Monday and flash-flood warnings were issued elsewhere as downpours swelled creeks and rivers to potentially dangerous levels in the already soggy region. 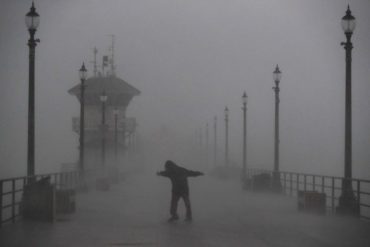 A man struggles against gusty wind and heavy rain as he walks along a pier Friday, Feb. 17, 2017, in Huntington Beach, Calif. A major Pacific storm has unleashed downpours and fierce gusts on Southern California, triggering flash flood warnings and other problems. (AP Photo/Jae C. Hong)

A levee break along the San Joaquin River prompted an evacuation order for about 500 people living in mainly ranch and farmlands near Manteca, San Joaquin County authorities said.

The gap was filled and the leak halted Monday night but the evacuations and a flash flood warning remained in effect into Tuesday morning.

Crews worked Monday night to patch the breach, which followed an earlier warning that the river was approaching the top of levees and could remain at that level for four days.

“When the water gets that high and more water is coming, there is just too much pressure and levees can break,” said Tim Daly, a spokesman with the San Joaquin County Office of Emergency Services.

In Monterey County, people living along a section of the Carmel River were told to leave, as were those in a neighbourhood of Salinas near Santa Rita Creek and a few people in rural Royal Oaks, where a mudslide encroached on a home.

In Lake County, northwest of Sacramento, about 100 homes in two mobile home parks and nearby streets were ordered evacuated because nearby Clear Lake was a foot above flood stage, county Sheriff Brian Martin said.

More homes could be placed under evacuation order along the 75-mile shoreline as the water slowly rises, Martin said.

“It’s very serious,” he said Monday night of the potential for flooding in an area that already has seen repeated downpours in recent weeks. “There’s going to be widespread property damage … our ground’s been saturated.”

No injuries were reported.

Rainfall with this weekends dumping rain may be the end of the D3 Z(red area) drought for California with Thursday's drought monitor. pic.twitter.com/rRv2nU1UUB

Meanwhile, about 2,000 people in the remote community of Spring Valley were blocked in because one of two entrance roads to the hamlet washed away and mudslides closed the other, Martin said.

“Our deputies are basically hiking in and hiking out,” Martin said.

Authorities hope to use a temporary bridge to reopen it in the next few days.

In Monterey County, the Sheriff’s Office sent rugged Humvees out to help with the evacuations.

The Carmel River, which has flooded several times in the past month, was expected to rise to nearly 11 feet by Tuesday, which would be a moderate flood stage, while the Salinas River near Spreckels could reach nearly to the moderate flood stage of 26 feet by Tuesday night, which could inundate the Monterey-Salinas Highway, the Monterey Herald reported (http://bit.ly/2kSYbU1).

The Big Sur River reached its moderate flood stage of 10 feet Monday morning and was expected to crest at 12 feet, the paper reported.

“The ground is saturated, and all rainfall at this point is increasing not only the pooling along the lower-lying elevations but also the river levels,” said Eric Ulwelling, a division chief with the Monterey County Regional Fire District.

Areas of the county received more than 1 1/2 inches of rain in 24 hours. The National Weather Service said heavy rain could persist into the evening as the latest in a serious of storms hovered over California’s northern and central areas, including the San Francisco Bay Area and the Central Valley.

Weather watches and warnings were issued for nearly a dozen counties because of flooding concerns and gusty winds.

Santa Cruz County had seen 2.8 inches of rain in 24 hours and could see up to 8 inches before the storm passes Tuesday. Well over 1 1/2 inches of rain fell in San Francisco.

Forecasters said rainfall in San Francisco has already surpassed the normal annual amount for the wet season that begins in October.

A pre-evacuation advisory was issued for a community in Madera County after water discharges from Bass Lake were increased and threatened to swell rivers, officials said.

The order was issued for several roads near downtown North Fork, about 10 miles from the lake, The Fresno Bee reported (http://bit.ly/2m5S8NG).

Residents should be ready to leave quickly if conditions worsen, the sheriff’s office said.

In the mountains, the weather service forecast heavy snow in the Lake Tahoe area with a high avalanche danger until Tuesday in an area of the Sierra Nevada from Yuba Pass to Ebbetts Pass.

Forecasters said the winter storm could drop up to 5 feet of snow in areas above 7,500 feet while lower elevations could see between 8 and 24 inches of snow.

Forecasters advised motorists to avoid travel in the area through Tuesday.

Moderate to heavy rain along with snowmelt below 7,000 feet was expected to swell rivers and streams and increase the chance of flooding.

The Don Pedro reservoir, which captures water from the Tuolumne River, a key tributary of the San Joaquin, was at 97 per cent capacity.

For the first time in more than 10 years, water flowed into Lake Berryessa’s unique spillway.

The Monticello Dam Morning Glory Spillway, also known as the Glory Hole, operates similarly to a bathtub drain for the northern California lake.

Elsewhere, the water level kept falling at Oroville Dam, where a damaged spillway had raised major flood concerns and prompted the evacuation of 188,000 people a week ago.

In addition to very heavy rainfall, Friday storm may bring damaging winds to much of Southern California, even coastal areas. #CAstorm #CAwx pic.twitter.com/XVG9fhFmh7

Grayson Road closed at San Joaquin River between Shiloh Road and Grayson due to flooding. pic.twitter.com/Xji9Y4ffZC