Experts are calling on the federal transportation safety board to investigate a deadly bus crash in Ottawa to prevent similar incidents from occurring again.

Ahmed Shalaby, a civil engineering professor at the University of Manitoba, said the Transportation Safety Board should be involved in probing the deadly crash to ensure the probe is transparent and recommendations are made to improve safety across the country.

“The bus was carrying 90 passengers,” he said. “Is that not important enough to warrant a federal safety investigation? If it isn’t, then what is?” 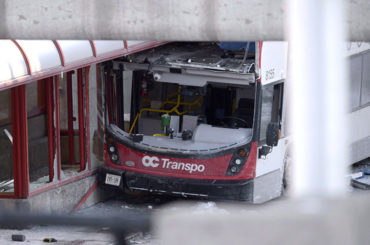 A double-decker city bus that struck a transit shelter at the start of the afternoon rush hour on Friday, remains in place at Westboro Station in Ottawa, on Saturday, Jan. 12, 2019. THE CANADIAN PRESS/Justin Tang

On Friday afternoon, a double-decker bus operated by local transportation agency OC Transpo hopped a curb and struck a transit shelter, carving deep into the vehicle’s upper level and crushing a number of seats.

A local hospital said one person remains in critical condition, six are listed as serious and four are in stable condition.

The safety board confirmed that they are not investigating the bus crash as the federal independent agency only probes marine, pipeline, rail and air incidents.

“If this bus were a train, the (board) would immediately investigate. That’s not enough to make a difference to me,” said Shalaby, who is also the chair of research program on municipal infrastructure.

The board’s mandate is to advance transportation safety by conducting investigations that result in public reports and making recommendations to improve transit safety.

“As part of its ongoing investigations, the TSB also reviews developments in transportation safety and identifies safety risks that it believes government and the transportation industry should address to reduce injury and loss,” said the Government of Canada website.

It differs from Transport Canada, which develops and administers policies, regulations and services for transportation systems, as the board works to advance safety specifically.

The board investigated a crash in 2013 in which six people were killed in an OC Transpo double-decker bus, but only because a Via Rail train was involved. The train and bus collided during a morning commute in suburban Ottawa, shearing off the front of the bus.

But Shalaby said the kind of vehicle involved in a mass-fatality crash shouldn’t make a difference in what spurs a government-led investigation.

Shalaby said he studied factors contributing to the Humboldt Broncos bus crash, which killed 16 when a transport truck and the bus carrying a junior hockey team collided at a rural intersection in Saskatchewan in April.

“We’ve been here many times before,” said Shalaby. “These federal investigations need to happen, the question is when?”

Shalaby said he wants the City of Ottawa to ask the federal safety board to be involved in the investigation, which is currently being led by Ottawa police.

The police force has released little information about the crash, citing a sprawling investigation dealing with numerous factors that will take time to reveal answers.

Hours after the crash the bus driver was arrested, but she has since been released unconditionally pending further investigation. On Saturday evening, police finished documenting the scene and re-opened nearby roads.

Const. Chuck Benoit said police continue to investigate the circumstances of the crash and if the police force believes additional agencies are needed, they would be sought out.

The city referred to Ottawa police when reached for comment.

Graham Larkin, executive director of Vision Zero, which works towards reducing traffic-related deaths and injuries, said he believes the board should be involved in the investigation since these types of crashes have occurred before.

In 2016, a 14-year-old boy was pinned underneath an OC Transpo bus that jumped the curb and slammed into a bus shelter.

Larkin added that the safety board’s job is to make recommendations, while police aren’t mandated to do so.

Both he and Shalaby said there’s a significant difference in the number of fatalities in road incidents than other modes of transportation the safety board looks into.

In 2016 there were 1,898 motor vehicle fatalities, 66 rail fatalities, seven marine fatalities, and 34 fatalities involving Canadian-registered aircraft, according to the Government of Canada website. It also said there have been no fatal accidents “on a federally regulated pipeline system directly resulting from the operation of a pipeline” since the board was created in 1990, however, one person was seriously injured in 2017.

“It seems crazy to ignore road safety,” said Larkin. “There’s no reason the government shouldn’t be taking a lead on this.”